Dr. Everett Wheeler of Duke University will present his research on “Parthians in the Roman Army” for the Pourdavoud Center on January 15, 2020.

Parthians in the Roman Army

The open frontier along the Euphrates River between the Roman and Parthian empires by no means marked a cultural divide. From the time of Pompey on, both powers availed themselves of forces from local dynasts and mercenaries. Parthian dynastic strife produced exiles and refugees, some of which migrated into Roman territory with retinues and war bands. The Roman army’s need for horsearchers rendered Parthian skills most desirable. This lecture will survey Parthians in the Roman army with particular attention to two explicit Parthian units: the ala I Augusta Parthorum, with service c. 6-401 in Pannonia, on the Rhine, in Spain, North Africa, and occasionally in the East, and the ala Parthorum et Araborum, active c. 38-70 on the Rhine. How ethnically Iranian these units were is unknown, particularly after the first generation of service. Re-stocking of such ethnic units with new recruits from their homeland is controversial, but probably occurred to some extent. From a Roman perspective, however, anyone from east of the Euphrates could be called a “Parthian,” especially if their native tongue was “Parthian,” e.g., Armenian, which makes ascertaining ethnic identity within these units challenging.

Everett L. Wheeler (A.B. with honors, Indiana University; Ph.D., Duke University) is currently Scholar in Residence at Duke University. He has held research positions from the Alexander von Humboldt Foundation, the Harry Frank Guggenheim Foundation, and the Institute for Advanced Study at Princeton. His hardcover publications include: Stratagem and the Vocabulary of Military Trickery (1988), translation (with Peter Krentz) of Polyaenus Strategika and related texts (1994), and (ed.) The Armies of Classical Greece (2007). His research focuses on ancient military history (both practice and theory) and the Eastern frontier of the Roman Empire, especially the Upper Euphrates frontier and Transcaucasia. 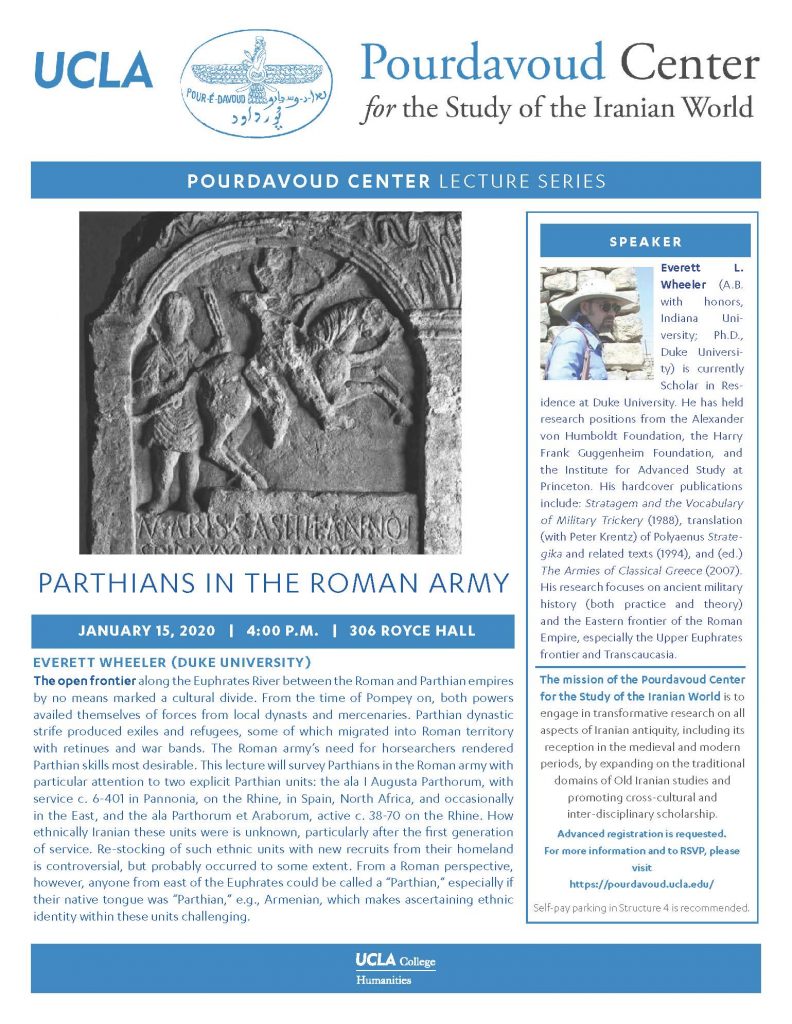 Pourdavoud Center for the Study of the Iranian World
Website:
https://pourdavoud.ucla.edu/