Juan Felipe Herrera is the 21st Poet Laureate of the United States (2015-2017) and is the first Latino to hold the position. From 2012-2014, Herrera served as California State Poet Laureate. Herrera’s many collections of poetry include Notes on the Assemblage; Senegal Taxi; Half of the World in Light: New and Selected Poems, a recipient of the PEN/Beyond Margins Award and the National Book Critics Circle Award; and 187 Reasons Mexicanos Can’t Cross The Border: Undocuments 1971-2007. He is also the author of Crashboomlove: A Novel in Verse, which received the Americas Award. His books of prose for children include: SkateFate, Calling The Doves, which won the Ezra Jack Keats Award; Upside Down Boy, which was adapted into a musical for young audiences in New York City; and Cinnamon Girl: Letters Found Inside a Cereal Box. Herrera is also a performance artist and activist on behalf of migrant and indigenous communities and at-risk youth.

Herrera has received fellowships and grants from the National Endowment for the Arts, the California Arts Council, the University of California at Berkeley, the Breadloaf Writers’ Conference, the Stanford Chicano Fellows Program, and a Guggenheim Fellowship. In 2016, he was awarded the Robert Kirsch Award for lifetime achievement at the 36th L.A. Times Book Prizes. Herrera was elected an Academy Chancellor in 2011. He was educated at UCLA and Stanford University in Social Anthropology, and received his MFA from the University of Iowa Writers’ Workshop. He has taught at the University of Iowa Writers’ Workshop and served as chair of the Chicano and Latin American Studies Department at CSU-Fresno. Herrera recently retired from the Creative Writing Department at UC Riverside. He lives in Fresno, California with his partner, the poet and performance artist, Margarita Robles.

Full Story on This Event Can Be Found Here: http://newsroom.ucla.edu/stories/former-poet-laureate-juan-felipe-herrera-receives-ucla-medal 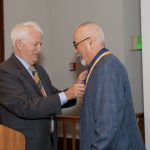 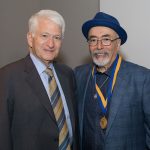 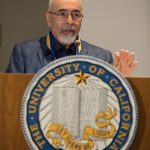 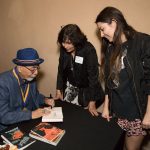 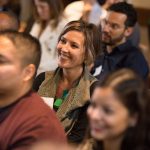 Audience for “Coming Back Home: Words on the Street” 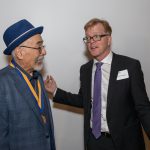 Valerie Smith, a distinguished scholar of African American literature and culture and past Dean of the College at Princeton University, was named the 15th president of Swarthmore College on Saturday, Feb., 21, 2015 following unanimous agreement by its Board of Managers.

Smith received her B.A. cum laude and Phi Beta Kappa from Bates College and her M.A. and Ph.D. from the University of Virginia. She is the author of more than 40 articles and three books on African American literature, culture, film, and photography and is the editor or co-editor of seven volumes. Her most recent publications include Toni Morrison: Writing the Moral Imagination; The Norton Anthology of African American Literature, third edition, edited with Henry Louis Gates, Jr.; and Race and Real Estate, edited with Adrienne Brown (forthcoming from Oxford University Press). At Swarthmore, she will hold tenured appointments in English Literature and Black Studies.

Smith’s numerous awards include fellowships from the Alphonse G. Fletcher Foundation, the Guggenheim Foundation, and the National Endowment for the Humanities, and Princeton’s President’s Award for Distinguished Teaching. She serves on the boards of Bates College, the N.J. Council for the Humanities, and McCarter Theater Center, as well as the editorial boards of Women’s Studies Quarterly, Criticism, and African American Review, among others.

Full Story on This Event Can Be Found Here http://newsroom.ucla.edu/stories/former-ucla-professor-activist-scholar-kicks-off-new-forums-on-diversity