Not for Keeps: The Ephemeral in Medieval Manuscript Culture 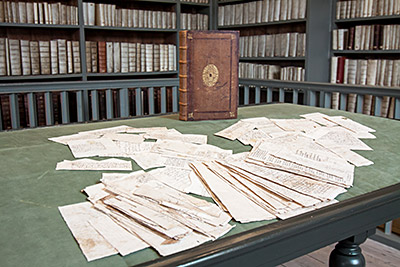 Richard and Mary Rouse History of the Book Lecture

While medieval manuscripts in Special Collection libraries were generally produced and preserved for posterity, not everything written down in the Middle Ages was intended to be kept forever: some information was disposable. Introducing a range of transitory objects, Dr. Eric Kwakkel (Leiden University) explores two related queries: What purpose did they serve; and, in what way do their material features reflect their short lifespan? This lecture will include recent discoveries made in Leiden University Library and the seventeenth-century Bibliotheca Thysiana, also in Leiden: scrap parchment with notes from a thirteenth-century scholar and paper slips with logistical “text messages” from a fifteenth-century court near Heidelberg.

Image above: The Thysiana book covers were filled with hundreds of medieval scraps of paper and fragments of parchments. Courtesy of http://news.leiden.edu/news-2014/bibliotheca-thysiana.html.