Law and Disorder: Fools, Outlaws, and Justice in the Middle Ages and Renaissance – Day 2 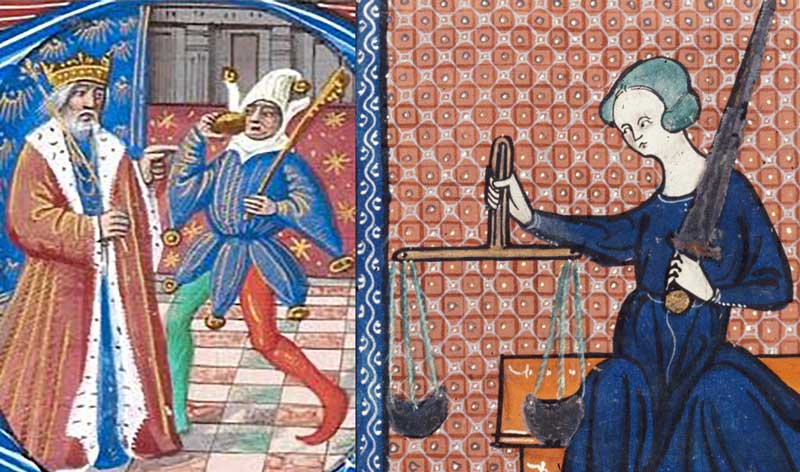 Is justice possible when foolishness runs rampant? Are folly and mockery valid means to restrain those who abuse power and thwart just treatment of the populace? This virtual conference, with presentations ranging from the high Middle Ages to the 20th century, will examine the social order reflected in the concepts of justice and its untidy, outspoken discontents—fools, scofflaws, even criminal figures. In the medieval and early modern periods, fools generally wore the mantle of outsider and rule-breaker; they were derided for revealing humanity’s foibles yet welcomed for speaking wisdom in the guise of nonsense. Our program will thus begin with a short film of an anonymous medieval fools’ play, “No Fooling With Justice” (Les esbahis) in modern English translation, depicting three fools who  literalize the human quest for justice in the world.

Following the screening (which will repeat the following morning), scholars from various disciplines–literature, history, performance—will offer perspectives on outlaws and contrarians vis-à-vis lawfulness and the character of Justice within human society past and present. While the jester-characters of sotties were mostly relegated to liminal spaces, other narratives presented rulers only too subject to foolish delusions of power, reducing them effectively to wield the marotte instead of the scepter. Some individuals considered foolish or disobedient never found a comfortable place to lodge within their society; others found agency and value by taking on the actual role of jester. In theater, fools might be condemned for their proximity to vice, but also might castigate it themselves, taking a small step towards a more just world. Texts also might portray vice as a seductive character to folly-beguiled spectators, making them effectively thumb a nose at justice. Modern “outlaw” comedians still dance on the razor’s edge in their standup routines, criticizing social bulwarks while wielding the hammer of humor.

Please click here to register for the lecture on Zoom.