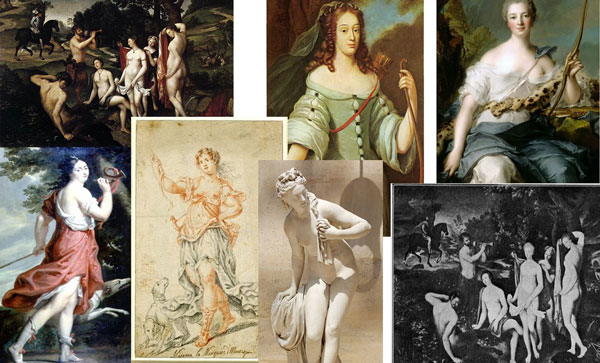 We are so used to the idea of the royal mistress as a constituent element of the French king’s grandeur that we tend not to think about how strange it is that in Ancien Régime France nine women who were not part of the royal family exercised significant political influence, their position imagined as part of a “tradition” and its occupants perceived as a coherent group. Although kings throughout medieval and early modern Europe had extra-conjugal sexual partners, only in France did the politically powerful royal mistress become a quasi-institutionalized position.

How did this happen? The position could not exist until imagined as part of a larger system of royal representation and the key moment comes when the royal family, traditionally assimilated with the Holy Family, began to be assimilated with the more fluidly composed family of classical deities. I focus on the period between Agnès Sorel (1422-1450), whose representation as the Virgin Mary can only be described as a “one-off,” and the Duchess of Etampes (1508-1580), who performed her role with François I in the “theater” of Fontainebleau where massive frescoes drawn from classical mythology provided a gloss for her career, and draw attention to the convergence of theatrical reading practices and renewed interest in the chaste but fierce huntress Diana that made the role of politically powerful royal mistress thinkable.

Tracy Adams is Associate Professor in European Languages and Literatures at the University of Auckland, New Zealand. She is the author of Violent Passions: Managing Love in the Old French Verse Romance(Palgrave Macmillan, 2005), The Life and Afterlife of Isabeau of Bavaria (The Johns Hopkins University Press, 2010), and Christine de Pizan and the Fight for France (Penn State University Press, 2014). With Christine Adams, she is completing The French Royal Mistress and the Politics of Representation.