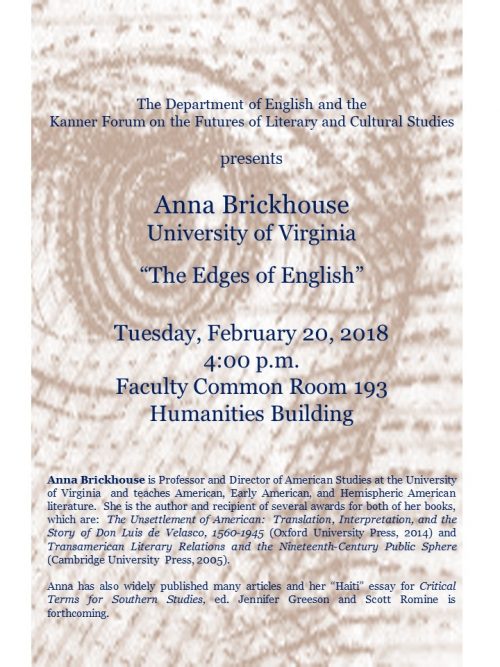 Anna Brickhouse is Professor and Director of American Studies at the University of Virginia  and teaches American, Early American, and Hemispheric American literature.  She is the author and recipient of several awards for both of her books, which are:  The Unsettlement of American:  Translation, Interpretation, and the Story of Don Luis de Velasco, 1560-1945 (Oxford University Press, 2014) and TransamericanLiterary Relations and the Nineteenth-Century Public Sphere  (Cambridge University  Press, 2005).

Anna has also widely published many articles and her “Haiti” essay for Critical Terms for Southern Studies, ed. Jennifer Greeson and Scott Romine is forthcoming.

The 2017-18 Kanner Forum is a prompt to think critically about the multiple histories that have informed “English,” broadly situated.  A series of linguistic, disciplinary, institutional, methodological, and theoretical conflicts lie beneath the seemingly-placid surface of a term that, when viewed over the long arc of its history, reveals little consensus about what it is, where it came from, or where it is going.  The exclamation point of the title should trouble the waters and unsettle any easy sense that we know what it is that we are doing in an English department.  Such unsettlement is more important now than ever.  In a time of institutional, environmental, economic, and political crises, how can the conflicts and exchanges that have shaped the formation of “English” be mobilized to respond?  The series will bring distinguished scholars to UCLA, each of whom have been invited to read “English Now!” as a provocation, or a question (English Now?), or an opening to different sets of questions (what now?).  The series hopes to foster lively, wide-ranging, and enduring discussions about the future of English as a discipline in the humanities.