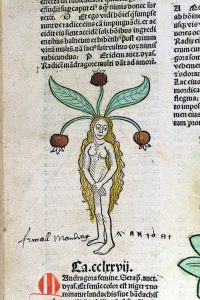 Sixteenth Kenneth Karmiole Lecture on the History of the Book Trade

–given by Sarah Neville, The Ohio State University

Between 1525 and 1640, the English book trade saw the production of more than two dozen editions identified by their imprints or by contemporaries as “herbals.” In a little over a century, this genre grew from a series of tiny unillustrated octavos to authoritative folio tomes with thousands of woodcuts. As herbals grew in both size and scope, these books of natural history became valuable commodities within a competitive print marketplace. Herbals served readers across the social spectrum, making them especially profitable investments for publishers eager to expand their customers, as well as opportunities for authors to establish their botanical credibility. By explaining the shifting contingencies and regulations that characterized English publishing, Sarah Neville argues that the construction of scientific authority in early modern England was inextricably tied up in the circumstances governing print.

Sarah Neville is an assistant professor in English at The Ohio State University, where she also holds an appointment in the department of Theatre, Film, and Media Arts. She is an assistant editor of the New Oxford Shakespeare (2016–17), and an associate coordinating editor of the Digital Renaissance Editions. Her essays on book history, Renaissance drama, textual scholarship, and digital editing have appeared in Shakespeare, Shakespearean International Yearbook, Variants, Textual Cultures, Notes and Queries, and edited collections. Her monograph, “Early Modern Herbals and the Book Trade: English Stationers and the Commodification of Botany,” is forthcoming from Cambridge University Press in Spring 2022.

Advance registration and proof of vaccination are required to attend, and face masks are required to be worn by all attendees at indoor events.  Please visit our website for additional details.