Eleni Kefala, “Strangers No More: Constantinople, Tenochtitlan, and the Trauma of the Conquest” 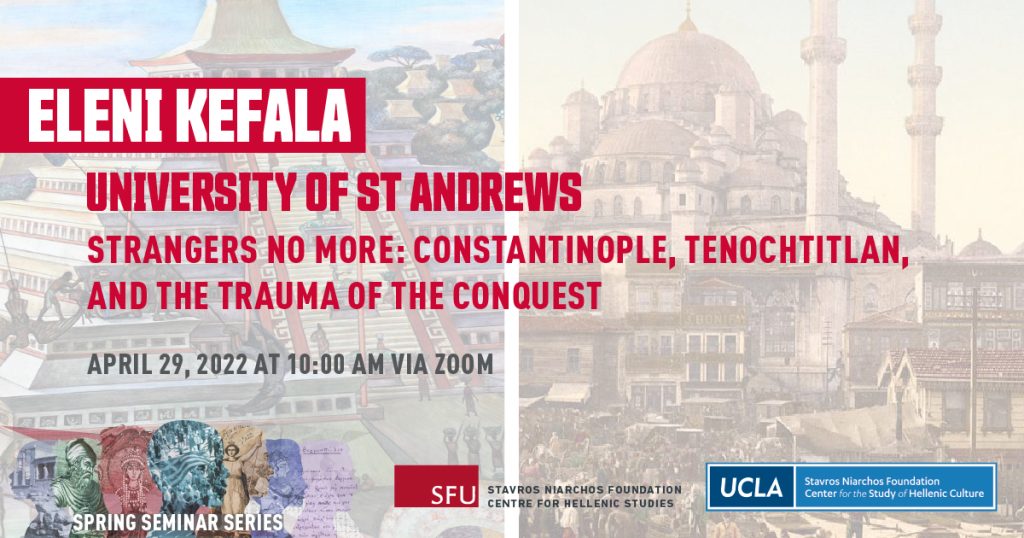 The Byzantines had long dreaded the year 1492. According to their calculations based on the Scriptures, it would bring the end of the world. In an eerie stroke of irony, they were right in their fears. Even though they were slightly off in the timing of the fall of Constantinople into the hands of the Ottomans, they anticipated with uncanny accuracy the end of the world as they knew it. Columbus’s crossing of the Atlantic paved the way for the European colonization of the Americas. But what is there in common between Byzantium and America beyond some bemusing serendipities? This paper approaches that question by rehistoricizing the fall of Byzantine Constantinople (1453) and Aztec Tenochtitlan (1521) while looking at three sorrowful poems composed by anonymous Greek and Aztec authors soon after the conquest of the Byzantine and Mexica empires.

Eleni Kefala is Senior Lecturer at the University of St Andrews. Her work explores modernity across different periods and cultures from a comparative and interdisciplinary perspective. She is the author of Peripheral (Post) Modernity: The Syncretist Aesthetics of Borges, Piglia, Kalokyris, and Kyriakidis (2007), The Conquered: Byzantium and America on the Cusp of Modernity (2020), and Buenos Aires Across the Arts: Five and One Theses on Modernity (2022), and editor of Negotiating Difference in the Hispanic World: From Conquest to Globalisation (2011).