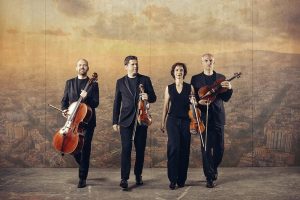 Founded in 1997 at the Escuela Reina Sofía in Madrid, Cuarteto Casals’ 25th anniversary will be celebrated in the 2022–23 season. Highlights of the 2021–22 season include the opening concert at the String Quartet Week at Boulez Saal in Berlin in May 2022, performances at the String Quartet Biennales in Paris and Lisbon, and at the Quartet Weekend in Lugano in January 2022, as well as a US tour in February 2022. Additionally, some concerts with orchestra are planned: e.g. in Barcelona with the Orquestra Simfónica and in Amsterdam with the Amsterdam Sinfonietta. Other highlights include concerts at Flagey in Brussels, at the Schwetzinger SWR Festpiele, and at L’Auditori in Barcelona.

Since winning First Prizes at the London and Brahms-Hamburg competitions, Cuarteto Casals has been a repeated guest at the world’s most prestigious concert halls including Carnegie Hall, Philharmonie Cologne, Cité de la Musique Paris, Schubertiade in Schwarzenberg and Concertgebouw Amsterdam, among many others around the world. Since September 2020 the quartet has been Artistic Director of the String Quartet Biennale Barcelona.

The quartet has compiled a substantial discography with the harmonia mundi label, including to date 15 CDs, with repertoire ranging from lesser known Spanish composers Arriaga and Toldrá to Viennese classics Mozart, Haydn, Schubert and Brahms, through 20th century greats Debussy, Ravel and Zemlinsky, as well as a live Blu-ray recording of the complete Schubert quartets for Neu Records. In May 2020, to coincide with the 250th anniversary of Beethoven’s birth, the third box set of a three-volume recording of his quartets was released on the harmonia mundi label; all three volumes received great critical acclaim.

Further details and full program on our website.
Chamber Music at the Clark tickets are no longer distributed via lottery.
Tickets for the Cuarteto Casals concert will go on sale at 12 noon on Tuesday, January 10, 2023.
Tickets sales are limited to 2 per person.
Tickets are sold on a first-come, first-served basis.