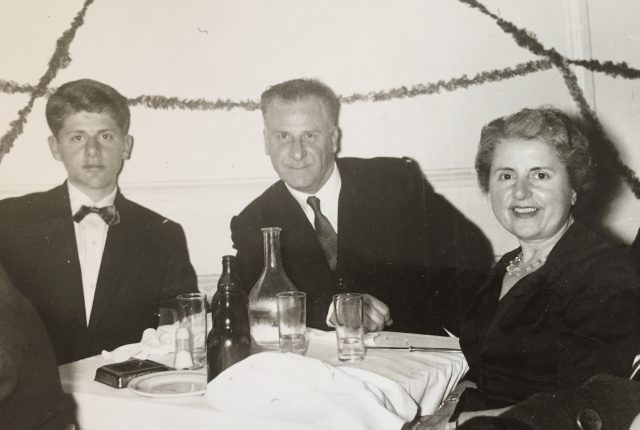 Photo: Peter J. Caloyeras with his parents Ioannis P. and Eirini Caloyeras, who lived on the Greek island of Spetses and were lifelong champions of education. | UCLA

The UCLA Stavros Niarchos Foundation (SNF) Center for the Study of Hellenic Culture announces the establishment of the Stavros Niarchos Foundation (SNF) & Ioannis P. and Eirini Caloyeras Lectureship in Modern Greek. The endowment, jointly funded by the SNF and Peter J. Caloyeras, creates a permanent, full-time lecturer position in Modern Greek Language and Culture, ensuring that courses in these subjects will be permanently offered at UCLA. The courses will be housed in UCLA’s Department of Classics, which has recently added a Minor in Greek Language and Culture. Dr. Simos Zenios, Associate Director of the Center, will become the inaugural holder of this position.

The endowment is partially named for Ioannis P. and Eirini Caloyeras, the parents of Peter J. Caloyeras. According to Caloyeras, “My parents would be honored by this lectureship. My parents and other family members for generations were born, and lived, on Spetses. As ship owners and shipping agents mainly, they traveled widely and experienced other cultures. Schooling was important to the family but limited on Spetses, so after completing the primary grades, they were sent to Piraeus to attend secondary school and to have professional training. Education was very important to my parents and for that reason they and my uncle encouraged me to come to the United States to study engineering. And it remains important to me personally.”

Speaking about Eirini Caloyeras, he noted: “My mother valued education especially and was trained as an elementary school teacher in Piraeus. As a young woman, she taught for several years at Greek schools located far from home at a time when few women left home except to marry. She remained lifelong friends with several fellow trainees. Her prodigious memory and avid curiosity served her and others well during the 108 years of her long life. She made several trips to Los Angeles to see her two sons, Peter and Anargyros, and her grandsons. My father lived to be 93 and maintained the family properties on the island. He also made several trips to Los Angeles to see his sons and his brother, Basil, and his family.”

Commenting on his decision to support an endowed position in Modern Greek, Caloyeras stated, “The establishment of this lectureship is the most important way that I can honor my parents and it is meaningful to me as it furthers my parents’ goals and values. In making this donation, I am expanding my family’s commitment to support Hellenic Studies programs in the Los Angeles area. For me, the connection between Los Angeles and Greece is of critical importance as it informs and inspires the next generation of young people through the study of the Greek language and its transmission of Greek culture.”

Dr. Sharon Gerstel, Director of the UCLA SNF Hellenic Center commented, “We are delighted to strengthen the educational mission of our Center through the addition of a permanent lecturer in Modern Greek Language and Culture. We are deeply grateful to both the Stavros Niarchos Foundation and to Peter J. Caloyeras for their continued support of our Center and for understanding that the study of the Modern Greek language connects our students and community both to Greece and to their Hellenic heritage. At a major university, moreover, Modern Greek is a critical research tool for many students and scholars.”

The connection to the Stavros Niarchos Foundation holds a deep meaning for Caloyeras. “This donation also allows me to express my personal gratitude to Stavros Niarchos and the SNF because the gift contributes to the close partnership between the UCLA SNF Hellenic Center and the Stavros Niarchos Foundation in Greece. It also offers me an opportunity to acknowledge the important role that Niarchos, as a neighbor who owned and lived on nearby Spetsopoula island, maintained with the island of Spetses. Niarchos’ personal contributions benefitted life on Spetses and he and his family have long been a part of its daily life.”