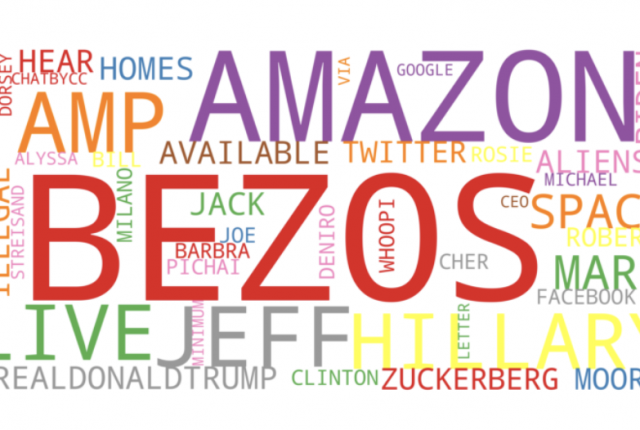 There are an estimated 330 million monthly active users on Twitter. Even Mark Zuckerberg, Elon Musk, and Jeff Bezos are on the social media platform, curating their own digital persona like the rest of us. But considering their prominence both inside and beyond the tech world, who exactly is engaging with them online, and what do they have to say about these tech moguls?

“We selected this topic because discussing controversial figures and topics on Twitter has become commonplace, and we were interested to see the nature of these discussions,” the group stated in their final whitepaper. “We narrowed our topic down to [these three] tech moguls specifically because these types of figures get a large amount of news coverage and have recently been at the center of many of the biggest modern-day scandals.”

“By informing readers of current conversations about these people, where they are taking place, and general themes, we can call into question how we relate to the people spearheading technological projects that significantly impact all of our lives.”

Tang and her group collected data using Twitter Archiving Google Sheet (TAGS), a free service that can set up and run an automated collection of search results from Twitter. Using the names of the three tech moguls, Tang’s group gathered a full week’s worth of tweets dated from April 10 through April 17, 2019.

More specifically, this project sought to analyze the public sentiment regarding Musk, Zuckerberg, and Bezos. Focusing primarily on English-only tweets made within the United States, Tang and her group looked at both the content of each tweet itself as well as the location of the tweet’s user and worked together to create several visualizations on Tableau of the data set.

The project presents various data visualizations. The first set depicts the frequency of words most used in tweets about each tech mogul. Through these word clouds, Tang’s group discovered that the most popular words tweeted about the three tech moguls were largely the result of a small handful of tweets that were retweeted extremely often.

“People are more likely to talk about things that directly relate to them,” Tang said. According to Tang, there is a pattern of “repetitive sentiments of public information [wherein] people will generally build up what they agree with.”

The project also visualizes geographic information within the United States and reveals an interesting contrast between the West Coast and the East Coast. Tang’s group discovered that based on their analysis of users’ sentiment on Twitter about these moguls, people on the East Coast were generally more positive in their tweets regarding Musk, Zuckerberg, and Bezos. On the contrary, users on the West Coast tended to have more polarizing opinions in their tweets.

“Areas where there is a higher percentage of white-collar workers were also more likely to tweet about technology-related things,” Tang said.

“All three [moguls] are based [in] the West, so these communities are constantly affected by their actions and decisions, and have the time to develop strong opinions,” the group stated. “East Coast cities, although certainly influenced, perhaps are only willing to speak on the ways in which these moguls’ companies directly impact their lives.”

Tang’s group also analyzed the use of hashtags in their data set. They found that #Facebook, #Amazon, and #Tesla were the most frequent hashtags for each respective mogul, attributing this to the conflation of each tech figure with their company.

“The most popular tweets in this time span concerning Bezos focused on political opinions, those about Musk focused largely on satire, and those about Zuckerberg focused on Facebook’s data privacy scandal,” the group said.

Given the influence these three men alone have, “Twitter’s Take on Tech Moguls” raises the following questions: What level of morality do we want to hold those at the forefront of technology—both in business and in their personal lives? How can discussions change to confront unchecked power?

“These companies touch the lives of almost every citizen in some way, and as a society, it is interesting to see who are the people willing to engage in conversation about these influential figures.”