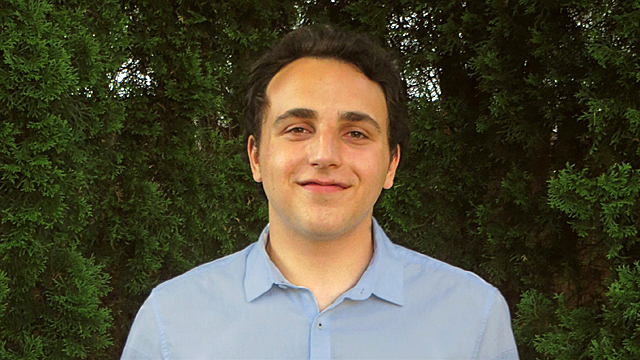 Joseph Matveyenko (UCLA 2021) will graduate from UCLA later this week with a double major in Russian studies and political science. Not only did he complete two B.A.s at UCLA, he wrote two research theses — one for each program — and presented them during undergraduate research week.

“I had only one and a half quarters on campus at UCLA before the pandemic hit,” says Joseph, who transferred to UCLA from Portland Community College (PCC) in fall 2019. His academic achievements have been considerable despite the challenges of remote classes and a tough start in the UCLA Russian Flagship Program.

The UCLA senior recently won a Boren Scholarship, a highly competitive government-funded scholarship, to study Russian for a year in Kazakhstan, as well as a coveted summer internship with the U.S. State Department.

Joseph tested into a special heritage-language class at UCLA when he joined the Russian Flagship, an intensive language program that aims to give students professional proficiency in Russian.

“It was incredibly hard for me, having just finishing first-year Russian at PCC, to go into a heritage speaker class,” he shares, despite having grown up with parents and grandparents who were Russian speakers.

“For the first four weeks, I would talk to my parents every day and they would say, ‘Are you dropping this class already?’ I even emailed my former Russian teacher at Portland and told her, ‘I don’t think I can do this!’

Her answer? “Professor Anna Kudyma [academic coordinator of the UCLA Russian Flagship Program] is one of the nation’s leading specialists in teaching Russian to heritage speakers. So if she said you belonged in that class, then you definitely deserve to be there.”

“That motivated me to stick it out,” said Joseph, who got through his first quarter with daily help from a grandmother. “I ended up taking a series of classes with Professor Kudyma on Russian and Soviet history — they were actually language courses for heritage speakers. That was my first exposure to Soviet history, and it was all in Russian.”

Jointly administered by the Center for World Languages (CWL) and the department of Slavic, East European and Eurasian languages and cultures (where Kudyma is senior lecturer), the federally funded Russian Flagship Program offers students an intimate academic major in a large university setting. Students take classes with the same cohort and teachers throughout their undergraduate years.

The demanding program requirements include advanced Russian and Russian culture classes, individualized tutoring and completion of two study abroad programs: one for a summer and one for a full academic year. Most Bruins complete the program in five years; as a transfer student, Joseph will do so in three, finishing his capstone year at the Al-Farabi Kazakh National University in Almaty, Kazakhstan over the 2021-22 academic year.

Joseph’s initial struggles in the flagship program gave way to a rapid acquisition of Russian skills that he used to conduct research for his theses. “I basically spent the whole summer between my junior and senior year attending an online intensive Russian-language program and creating a dataset on elections in Armenia, Moldova and Ukraine from 2006 to 2020. I used the same set of data for both theses,” he remarks.

His Russian studies thesis examines Armenian elections. “There’s a really big difference in the data before and after the democratic revolution of 2018,” he explains. “Basically, all of the irregularities — no matter what type of testing method you use — disappear in 2018.”

His political science thesis was more ambitious in both scope and methods. “Joseph’s senior thesis is a remarkable piece of work,” says Professor Daniel Treisman, with whom Joseph took a course in Russian politics and who later became his thesis advisor.

“Using his Russian language skills, he located and scraped data from the Internet on elections in three post-Soviet countries. He then used cutting-edge techniques of ‘elections forensics’ to explore the statistical characteristics of the official results, identifying anomalies that suggest different kinds of fraud.

“Matching the reports of OSCE observers against the clues hidden in the official statistics, he showed the strengths and weaknesses of both methods of evaluating elections,” continues Treisman. “With an original kind of detective work, he combined the statistical explorations with a review of the local press to uncover the role of local oligarchs in influencing elections.”

Joseph explains, “What I found was that forensics analysis consistently detects outright fraud, such as ballot stuffing and purchasing votes, because it leads to statistical anomalies in the election results. But things like intimidating voters, perhaps by attacking the opposition and independent media, or the misuse of state resources, cannot really be detected with statistical methods yet.”

Notes Treisman, “The thesis is a great example of how rigorous political science techniques can be used to uncover a hidden story — in this case, that of the murky electoral politics of Ukraine, Moldova and Armenia in the post-Soviet era.”

Although Joseph hopes to begin an intensive Russian-language program in Kazakhstan this fall, it remains unclear whether the U.S. State Department will allow students to travel to the country due to pandemic precautions. (Last year, Flagship students attended remotely.)

His plans to intern at the U.S. Consulate in Kazakhstan this summer proved untenable for the same reason, so he is making arrangements to do an online internship with the Bureau for South and Central Asian Affairs of the State Department.

What is clear is that Joseph has come to love Russian and doing research, and that both will figure in his future. “I’m really interested in Kazakhstan,” he says. “I have a lot of research interests in Central Asia, from gender politics to oil-export dependency.

“I really liked that the Flagship program provided tutoring specialized to what you are studying. Last quarter, I was taking a class on economic development and I did a project on ecological issues in Kazakhstan. So my tutor would find articles on topics such as environmental regulation in Central Asia and we would read those in Russian. It was really helpful to have that perspective when working on my research project.”

As for the grandmother who helped him survive his first quarter? She speaks to Joseph only in Russian now.