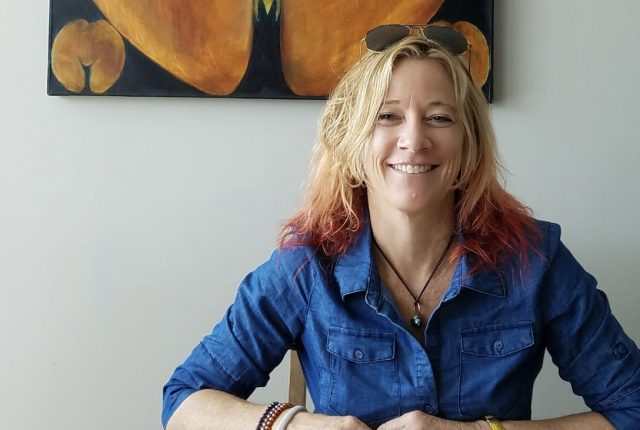 Elizabeth DeLoughrey, a UCLA professor of English who also holds an appointment in the UCLA Institute of the Environment and Sustainability, received a 2021 John Simon Guggenheim Memorial Fellowship in the category of literary criticism in recognition of her existing work and future potential.

DeLoughrey teaches postcolonial literature courses on the environment, globalization, and the Anthropocene with a focus on the Caribbean and Pacific Islands. She has published several books, including her latest, “Allegories of the Anthropocene” (Duke University Press, 2019), and co-founded the UCLA Postcolonial Literature and Theory Colloquium. In addition to being honored with a Guggenheim, DeLoughrey has received support for her scholarship from institutions including the American Council of Learned Societies, National Endowment for the Humanities, Rockefeller Foundation, Andrew W. Mellon Foundation, New Zealand Fulbright Program, and the Cornell Society for the Humanities.

The Guggenheim Fellowship was created in 1925 by Senator Simon Guggenheim and his wife, Olga, when they established the John Simon Guggenheim Memorial Foundation in memory of their late son. According to the foundation’s website, “the Guggenheim Foundation offers fellowships to exceptional individuals in pursuit of scholarship in any field of knowledge and creation of any art form, under the freest possible conditions and irrespective of race, color, or creed.”

Specifically, the fellowships are aimed at mid-career individuals who are producing exceptional or novel scholarship or who exhibit large potential for their future work. Each year, according to its website, the foundation receives an estimated 3,000 applications and awards approximately 175 fellowships.

DeLoughrey received the honor in recognition of her work on a book project called “Outer Spaces: Imagining the Ends of the Earth,” which explores the relationship between humans and spaces that we cannot inhabit such as the deep seas, poles, and outer space. This project stemmed from previous research she had been working on involving Caribbean and Pacific Island literature, looking at histories of diaspora and how writers and artists imagine a relationship to place in the wake of displacement.

“The questions my previous research asked were how do diasporic peoples relate to place—how do you connect with the landscape or the seascape if your family history is from elsewhere? How do you inscribe that relationship in literature, or visualize it in the arts? Moreover, how do Indigenous writers and artists imagine their place in the wake of settler colonial histories of violence and displacement?” she said.

That relationship to place is made all the more complicated when it comes to the outer spaces of the global commons, which were territorialized in the Cold War. Turning to Black and Indigenous writers and artists who imagine these outer spaces is a way to ‘deterritorialize’ Cold War narratives, DeLoughrey added.

“This year I explored lots of visual artists, poets, and novelists from the global south to examine how they were imagining outer spaces as place, and how that may complicate the concept of the human and nonhuman alike.”

She was shocked, she said, but pleasantly surprised to be awarded the fellowship.

“The Guggenheim Fellowship is probably the most prestigious fellowship out there… it’s a real testimony, not just to the current project, but to the trust that the readers and reviewers had in my scholarship,” she said.

The fellowship, she added, provided her with the opportunity to focus on her research with increased attention.

“The Guggenheim allowed me to take time off of my administrative work, my teaching work, and to really kind of dive deep and dig into these archives,” she said.

In addition, it provided her with the opportunity to hire a research assistant.

“We had a lot of fun diving into the archives at Scripps Institution of Oceanography to look at the files on  Sealab, the experimental U.S. Navy underwater habitats of the 1960s, and how they were imagining the submarine world,” she said. “ It was fascinating to find that there were close scientific connections to the underwater film studios who created popular TV series such as ‘Sea Hunt,’ and ‘Flipper.’”

DeLoughrey added that her big-picture goal is to impact the community and raise awareness.

“My bigger hope is to do some curating at two local museums in order to raise awareness of these connections, and be able to tap into some of the archives that we have here in Southern California,” she says. “I have two exhibits that I’m in the process of working on right now in order to raise consciousness about the fragility of these spaces, with a particular concern about deep sea mining in the Pacific Ocean.”