Mural Pays Respect to Remains of Women Found Near the U.S.-Mexico border 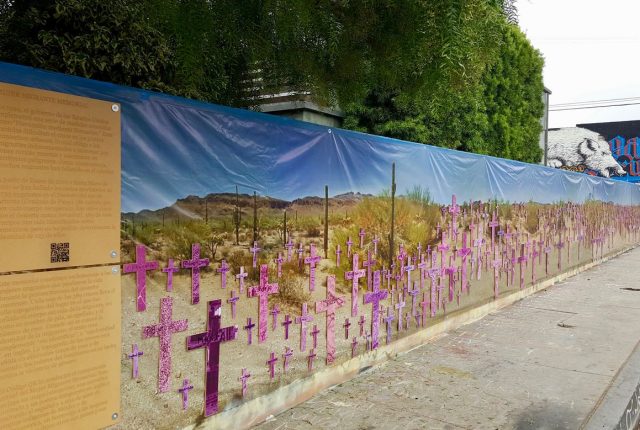 As you walk along Pacific Avenue in Venice there’s a tattoo parlor — its side wall covered in graffiti — scraps of trash strewn about. Across the alley, interrupting the classic beach community scene, you encounter a wall installation of 389 pink and purple wooden crosses affixed to a 90-foot panoramic backdrop of cacti, sand and desert brush.

Names adorn the crosses: “Paulina,” “Rosa,” “Maria,” “Fabiola,” are among them, but so many are “unidentified.”

Each cross represents a female migrant who died in Pima County, Arizona, near the U.S.–Mexico border from January 2001 through May 2021.

The exhibit is one part of a project called Mujer Migrante Memorial, a touring urban art installation and accompanying website created to memorialize female migrants and mourn their deaths in the southern Arizona border region, while raising awareness about migrant death in the U.S.–Mexico borderlands. The website includes poetry, background information and statistics and photos. There’s also a map that indicates the exact locations where remains were recovered; on the installation the individual crosses are coated with photography of these locations individualized to where each set of remains were found.

“It’s so horrifying that there are so many bodies found in the desert and that the wall is covered with so many crosses,” said Maite Zubiaurre, a UCLA professor of European languages and transcultural studies and an artist who signs as Filomena Cruz, who led the creation of the project.

Women make up 15% of the close to 3,800 migrant remains recovered from the southern Arizona desert since the 2000s. To try to balance against the stark brutality of the numbers, the crosses are shrouded in a color filter of soft pink and purple to represent the fight of international feminism against gender violence.

“The whole thought process was ‘how can we honor the migrants without actually re-traumatizing family if they see it,’” said Zubiaurre, also a professor of Spanish and Portuguese, who noted that some of the crosses show a road or even a highway because that’s where the remains were found.

“This means that the migrant who died there probably died listening to the cars rolling by and could have been saved,” she said.

Full Newsroom Article can be Found Here: Mural Pays Respect to Remains of Women Found Near the U.S.-Mexico border