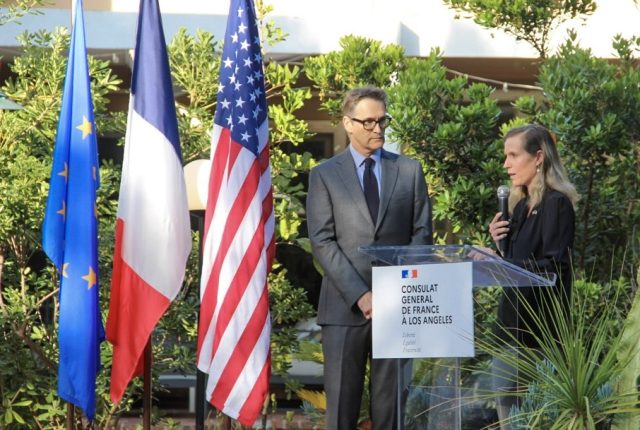 Dominic Thomas, Madeleine Letessier Professor of French in the Department of European Languages and Transcultural Studies, has been named an Officer in the Order of Academic Palms, or l’Ordre des Palmes académiques. The Academic Palms is the oldest civilian award given out and is second only in age to the Legion of Honor. They were created in 1808 by Napoléon Bonaparte to honor university professors. The French Minister of National Education recommends nominees for the honor to the French Prime Minister, who, if she or he is in agreement, issues an official decree naming recipients.

Mrs. Julie Duhaut-Bedos, Consul General of France in Los Angeles, bestowed the honor at a ceremony on May 5, 2022. Below you will find an excerpt from her statement:

It is a genuine pleasure for me and my team to welcome you all here today at the Résidence de France and to join me in honoring Dominic Thomas. Dominic, we are here to share our admiration for your personal and professional engagement in promoting the French language, in disseminating French and Francophone cultures, fostering university and cultural exchanges between France and United States, and to recognize your contributions by naming you Officer in the Order of Academic Palms.

Your different activities over more than 20 years have helped to build and strengthen long standing ties between our two countries. Your commitment has been exacting, precise, and rigorous, and supported by an unusual capacity for work, to which your books, articles, and translations bear witness, works in which you draw attention to certain chapters in our history, most notably our colonial history. You are a recognized scholar who has helped your students and readers improve their understanding of contemporary French and Francophone societies, and who is able to draw on these insights to shed light on the big questions of our era, such as identity and racism.

Having said this, dear Dominic, I would like to remind our guests just why your university career has been so remarkable, and the extent to which this reflects on you as an individual and your great human qualities, as much as academic ones. You began your university career at the University of Notre Dame in Indiana, and joined the faculty at UCLA in 2000. A mere five years after your arrival, you started your first of 5 terms as Chair of the Department of French and Francophone Studies, and as if this was not already enough in your already full schedule, you also accepted to Chair three other departments (German, Italian, Scandinavian) between 2017 and 2020. These demanding administrative responsibilities are evidence of the recognition and trust of your peers; this made it possible for you to establish the new Department of European Languages and Transcultural Studies in 2020, and for which you served as the Inaugural Chair until 2021.

Together, these examples underscore your intellectual honesty, but also your human and professional exemplarity. You know how to carry ideas and stimulate new projects, while also remaining available to your colleagues and students.

Your focus on “transcultural” studies compels us to simultaneously consider the singularity of Europe and the multiple cultures and histories that have shaped it over the centuries. The Caribbean and African continent, about which you have written so extensively, in particular with your esteemed colleagues Pascal Blanchard and Nicolas Bancel, come to mind. In your numerous publications, focusing on contemporary French politics, identity, immigration, colonialism, you have shown how these categories can be applied to the analysis of the relationship between mainland France and France overseas, and you offer an interdisciplinary perspective that has contributed to breaking down disciplinary boundaries.

Finally, at a time when France holds the presidency of the Council of the European Union and as European flags floated over Paris on the evening of the run-off stage of the French Presidential election, we were able to watch you live on CNN sharing your deep knowledge and insights of Europe and France, thereby offering American audiences an appreciation of the challenges with which our continent is confronted today.

In 1950, in his famous Discourse on Colonialism, Aimé Césaire –an author you have translated –sounded the following warning:

A civilization that proves incapable of solving the problems it creates is a decadent civilization.

A civilization that chooses to close its eyes to its most crucial problems is a stricken civilization.

Unquestionably, dear Dominic, because of your competencies, the richness of your scholarly production, your energy, you make it impossible for us to ignore the crucial problems evoked by Aimé Césaire, and for us to work together in avoiding the traps set for us by intellectual laziness and moral comfort.

It is your unyielding intellectual commitment that the French Republic wishes to recognize by naming you Officer in the Order of Academic Palms.

Warmest congratulations on your achievement, Dominic!