How Interdisciplinary are UCLA Undergraduate Majors? 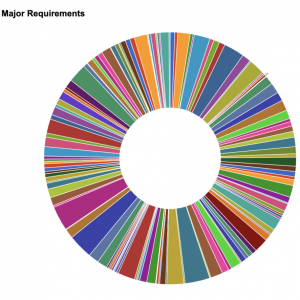 College is a time to explore and gain exposure to different fields of study and potential careers, so it’s no wonder that major programs at many universities try to provide as diverse of a curriculum as possible. UCLA is no exception. Here, an undergraduate studying environmental science can take classes in philosophy and public policy—and have it count towards their major. But are some majors more or less interdisciplinary than others?

Natasha Ann Lum, a third-year global studies major, collaborated with two other students, Elizabeth Nakamura and Kyle Fernando, to create “Analysis of Major Interdisciplinarity,”which takes a look at what academic disciplines at UCLA have the most interdisciplinary coursework.

Lum, Nakamura, and Fernando chose the topic of major interdisciplinarity because it aligned with each of their personal interests. Lum herself chose her major because it has been touted as one of the most interdisciplinary programs offered at UCLA.

“After the Sentiments of Notre Dame project, because I had dealt heavily with doing the visualizations, I wanted to move into data analysis, “Lum said. “[Fernando and Nakamura] both wanted to work with a topic that was about education and UCLA.”

“I was looking at classes for my next quarter and I was just kind of thinking, ‘Wait, there’s a lot of data on the classes and the major requirements, but it’s all over the place, and nobody ever tried to consolidate them,’” Lum said.

Lum’s project group began by scraping data on the courses required for each major offered at UCLA directly from the UCLA Registrar and General Catalog.

“I don’t think the different departments had any coordination with each other, so a lot of things were in different syntaxes,” Lum said. “So on the surface, they look the same, but there were major differences: some would use semicolons, and other departments would use bullet lists.”

Using Google Charts and Tableau, Lum and her group created several data visualizations, including the above pie chart which compares the number of major requirements for each discipline that involved coursework from outside the major.

The project also provides “fundamentality scores,” which measures how many majors across campus require courses from a certain discipline. They found that Spanish ranked highest among the Humanities, and—as expected—areas of study such as Mathematics, Chemistry, Biology, and Physics all earned high fundamentality scores.

In conclusion, Lum and her group state that their findings speak to “the strict divide between the Humanities & Social Sciences and STEM.”

Lum said, “I’m a total advocate for just not even having any of these boundaries in the first place so that more students can take different classes and be a jack of all trades, and you’re actually more valuable when you go into the job marketplace.”

Since completing the project, Lum has interned at a blockchain trade association in Washington, D.C. and says her interdisciplinary background gave her an advantage as an intern.

“I didn’t know a lot about law and policy,” Lum said, “but I did take [a] global studies class in policy, so having that sort of superficial background gave me the direction as to where I should investigate and analyze particular issues.”

Lum hopes that students and administration see the value and importance of interdisciplinarity in higher education.

“I feel like people shouldn’t feel like they have to take two majors, two minors, in order to incorporate all their interests,” Lum said. “Everything is more interconnected than you think it is.”