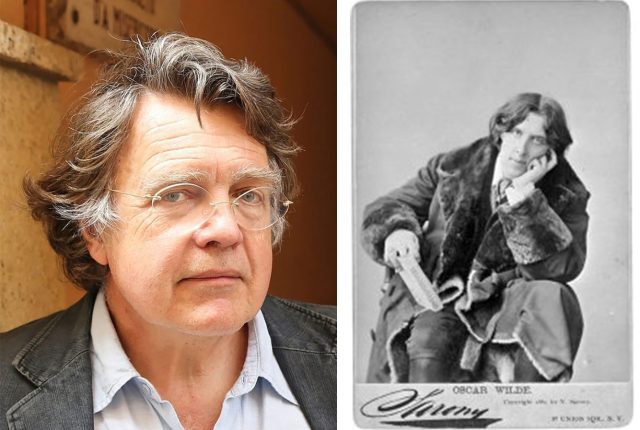 UCLA has received a generous gift from William Zachs and Martin Adam to establish the endowed Wilde-Holland Fellowship in the UCLA Center for 17th- and 18th-Century Studies & William Andrews Clark Memorial Library. The gift qualified for matching funds from the Kaplan-Panzer Humanities Endowment.

The fellowship is open to postdoctoral scholars, graduate students and visiting scholars engaged in research using materials from the Clark’s unparalleled collection of Wilde materials. At the culmination of the two-month fellowship, the Wilde-Holland Fellow will deliver a presentation of their research.

Wilde (1854-1900) was an iconic and controversial 19th-century playwright, poet, novelist and editor. The Clark’s collections of Wilde materials are among the most comprehensive in the world and include handwritten letters and drafts of literary works by Wilde and his circle; a nearly complete collection of printed editions of his works; photographs, original portraits and caricatures; and playbills, news cuttings and other ephemera.

The Wilde collections are some of the most popular at the Clark Library, consulted by students and scholars from myriad academic disciplines including English literature, theater studies, gender studies, art history, visual studies, communication, and the book arts.

Bronwen Wilson, Director of the Center for 17th- and 18th-Century Studies & William Andrews Clark Memorial Library at UCLA, said, “We are deeply grateful for this generous gift in support of scholarly research related to the short but brilliant life of Oscar Wilde. The Wilde-Holland Fellowship will attract exceptional scholars who will make full use of the Clark’s impressive Wilde archive, revealing new insights about this extraordinary man and the era in which he lived.”

William Zachs, a literary scholar and antiquarian, and Martin Adam are longtime supporters of the Clark. In 2005, they endowed the Oscar Wilde Lecture at the Clark, a biennial series that focuses on the author, his literary circle and the Decadent movement of the 1890s. The next Lecture will be given at the Clark on Thursday, April 28, 2022, by Wilde’s only grandson, Merlin Holland, for whom the fellowship has also been named, and a scholar dedicated to studying and celebrating Wilde’s legacy.

“The Clark Library’s collection of Oscar Wilde material is indisputably one of the finest in the world. It is an Aladdin’s Cave for literary scholars and historians alike, forever yielding up new treasures for those who have the time and the patience to uncover them,” Zachs said. “Good scholars by definition have patience, but time is not always on their side, an imbalance which we hope this fellowship will help to rectify and allow them to explore in depth and at leisure that most charismatic and fascinating of late 19th-century cultural figures.”