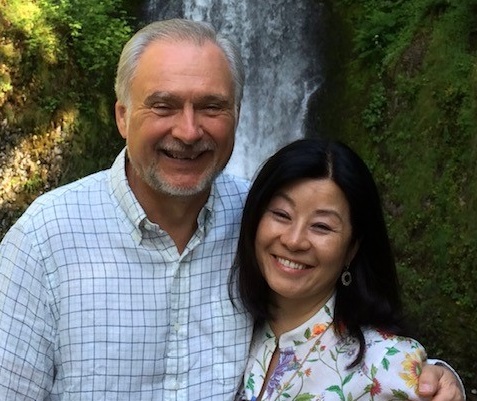 The couple’s gift commitments created the Chinul Endowed Chair in Korean Buddhist Studies—the first permanent endowed chair in Korean Buddhism outside of Korea—and the Robert E. and Christina L. Buswell Fellowship in Buddhist Studies in support of graduate students in the department. The endowments will be funded as a blended gift with a portion paid over five years and the balance as a deferred gift from the couple’s estate.

The endowed chair, which is currently pending Academic Senate review, is named in honor of Puril Pojo Chinul (1158-1210), the most influential monk in Korean Buddhist history. The graduate fellowship gift was augmented by $25,000 by the Humanities Division Centennial Matching Program (made possible by the Kaplan/Panzer Humanities Endowment).

Robert Buswell, who is retiring from UCLA after 36 years, holds the Irving and Jean Stone Endowed Chair in Humanities at UCLA and is considered the premier Western scholar of Korean Buddhism and one of the world’s top specialists in the meditative traditions of Buddhism. He founded UCLA’s Center for Korean Studies in 1993 and Center for Buddhist Studies in 2000.

Buswell has published extensively on Buddhism and served as editor-in-chief of the two-volume Encyclopedia of Buddhism and co-author of the 1.2-million-word Princeton Dictionary of Buddhism. Among his many honors, he was elected president of the Association for Asian Studies in 2008 and, in 2016, became the first (former) Buddhist monk elected to the prestigious American Academy of Arts and Sciences.

“Robert Buswell’s impact on the fields of Buddhist studies and Korean studies has been unparalleled,” said David Schaberg, senior dean of the college and dean of humanities. “Not only has he built, here at UCLA, the nation’s largest programs in these two areas, he has also trained dozens of scholars now teaching and studying at academic institutions all over the world. I am immensely grateful for his leadership and for his and Christina’s extraordinarily generous gift.”

Robert Buswell’s path to UCLA began with an existential quest that led him to drop out of college in 1972 and spend seven years as an ordained Buddhist monk in Thailand, Hong Kong, and finally Korea.

As a teenager raised in a non-practicing Methodist family, he’d read texts by Western philosophers and pondered such questions as “How can we live without exploiting other people?”

“On my first exposure to Buddhism when I was 16, I was thunderstruck at how closely it mirrored the philosophy of life I had been creating for myself. I’ve been completely enamored with Buddhism ever since,” he says.

During his five years as a monk at Songgwang monastery, considered the “jewel” of the monastic community in South Korea, Buswell began translating texts by its founder Puril Pojo Chinul. After finishing his first translation project during the off-seasons between Zen meditation retreats, he realized he was still deeply drawn to the scholarly study of the Buddhist tradition. He decided to return to the U.S. to resume his university education, eventually earning his Ph.D. in Buddhist studies from UC Berkeley in 1985.

Christina Buswell’s journey to Buddhism closely mirrors that of her husband. Raised a Catholic, she immigrated from South Korea to the U.S. with her family when she was 13 years old, an experience that gave rise to much reflection and angst about her cultural identity.

She says, “My experience as a Korean-American immigrant led to a quest to understand myself and ask the question ‘who am I?’ I kept looking for answers, and in the end, Buddhism made the most sense to me.”

In the course of earning a B.A. in Religious Studies from the State University of New York at Stony Brook and an M.A. in Korean Studies from Columbia, Christina found few resources directly related to Korean Buddhism.

“It was important to both of us,” she says, “that there be at least one U.S. university with a permanent faculty chair specifically devoted to Korean Buddhism. UCLA is the ideal place for this chair since the university has played such an important role in developing Korean and Buddhist studies as fields.”

As for the name of the chair, Robert Buswell adds, “It seemed appropriate to name [the chair] after Chinul, the most influential monk in Korean Buddhist history and the inspiration for much of my own scholarly work. Chinul believed that success in Buddhist meditation demanded a solid grounding in doctrinal understanding. This rigorous combination of doctrinal study and Zen meditation has remained the distinguishing characteristic of Korean Buddhism ever since.”

Robert Buswell says that careful estate planning and creative philanthropy can allow faculty who have devoted their careers to building academic programs, as he has done, to ensure their scholarly legacy continues far into the future.

“With this gift, we’ve fulfilled a long-term dream of ours to have the field of Korean Buddhist studies established permanently in the U.S. The graduate fellowship adds a crucial element to the mix, as it will enable the department to recruit and train the next generation of scholars in Buddhist studies.”

Seiji Lippit, professor and chair of Asian Languages and Cultures, adds, “Buddhist studies is one of the department’s traditional strengths, but this new chair and graduate fellowship will make us that much stronger. The chair provides a solid faculty presence to support the field and train graduate students, so the two gifts really go hand in hand. We can’t thank Robert and Christina enough for their generosity.”

Robert and Christina Buswell first met in 1997 at Dongguk University in Seoul. Together, they’ve traveled the world, sharing their practice and knowledge of Korean Buddhism along the way. In retirement, they plan to do more traveling and more hiking, and will of course be continuing to attend meditation retreats together in Korea.

Robert Buswell will be the keynote speaker for the UCLA Humanities Commencement ceremonies on June 11 at Royce Hall.

If you are interested in supporting the Robert E. and Christina L. Buswell Fellowship in Buddhist Studies, please consider making a gift at giving.ucla.edu/BuswellFellowship.