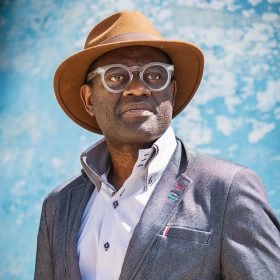 Franco-Congolese poet and novelist Alain Mabanckou won the 2018 Zora Neale Hurston/Richard Wright Legacy Award for fiction for “Black Moses,” a novel that follows the journey of an orphan from Loango through a revolution in the Congo to Pointe-Noire and the home of a madam with “ten girls, each more beautiful than the last.”

“It all began when I was a teenager, and came to wonder about the name I’d been given by Papa Moupelo, the priest at the orphanage in Loango: Tokumisa Nzambe po Mose yamoyindo abotami namboka ya Bakoko,” the novel opens. “A long name, which in Lingala means ‘Thanks be to God, the black Moses is born on the earth of our ancestors.’ ”

The judges called the book “a funny, efficiently-rendered picaresque tale” that “superbly traces the hero’s psychic collapse.” Mabanckou, who was born in what is now the Republic of Congo and is now a professor of literature at UCLA, writes about the “the perils of tyrannical government” in a setting that “is vivid and engrossing.

Mabanckou’s writing was celebrated during a gala Friday in Northwest Washington, where a ballroom filled with literary stars — including powerhouse publishers, poets, editors, screenwriters and playwrights — celebrated “black excellence” in storytelling in the African diaspora.

“Black writers continue to push through the barriers that have limited our ability to speak our truth to the world,” said Melanie Hatter, chairman of the board of the Hurston/Wright Foundation, which is named in honor of Harlem Renaissance writers Zora Neale Hurston and Richard Wright, and was founded more than 25 years ago with a mission to encourage writers of African descent and to ensure the survival of literature by black writers.

“As we navigate this political environment that pits white against people of color; against immigrants; against women, our voices are the stitching that weaves through the tapestry of America,” Hatter said. “This exceptional array of writers is leading the conversation on the black experience across the United States and throughout the world.”