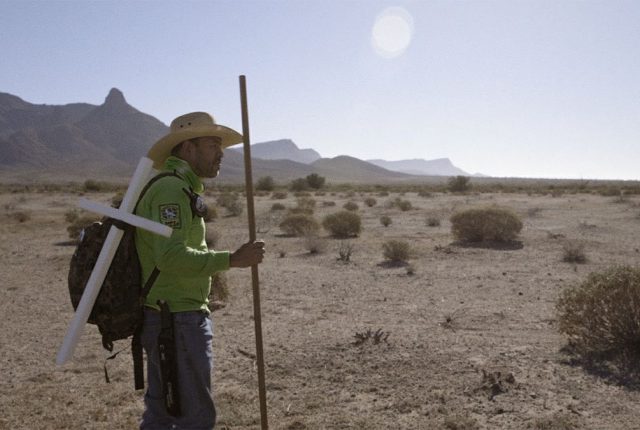 Photo Courtesy of David Marquez – An Águilas del Desierto volunteer carries a cross on each search to mark where any intact bodies have been found.

When UCLA professor Maite Zubiaurre decided to make a documentary about volunteers who search for the remains of migrants in the desert between the U.S. and Mexico, she wanted people to see what she believes has become invisible: not just the deaths, but how ignoring them enables policies that lead to even more deaths.

Now she’ll have an opportunity to help bring that hidden reality to light. Her 14-minute film “Águilas,” co-directed with Kristy Guevara-Flanagan, a professor at the UCLA School of Theater, Film and Television, has been selected to screen at both the Big Sky Documentary Film Festival (Feb. 20–28) and SXSW Film Festival (March 16–20) competitions. The mini-doc will then be available for a year through the New Yorker’s website.

The film garnering all this interest took shape when Zubiaurre, a professor of European languages and transcultural studies, and of Spanish and Portuguese, approached Guevara-Flanagan with the idea of highlighting the work of Águilas del Desierto (Desert Eagles), a humanitarian search-and-rescue group that scours the Arizona desert on weekends, looking for those reported missing. The documentary follows the volunteers on one of their searches.

Zubiaurre, who also co-leads UCLA’s Urban Humanities Initiative, spoke with us about the film and her concept of “forensic empathy,” which centers on consciousness-raising activism and compassion-triggering artistic practices around migrant suffering and death. Some responses have been edited for brevity and clarity.

Full article from UCLA Newsroom can be found here