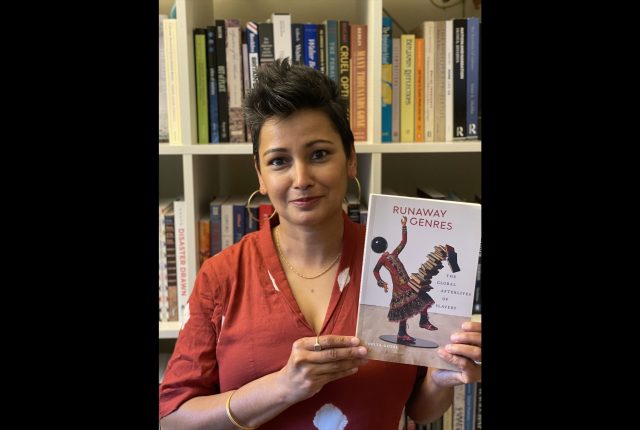 Yogita Goyal, professor of English and African American studies, has won a slew of awards for her book Runaway Genres: The Global Afterlives of Slavery, including the 2021 René Wellek Prize from the American Comparative Literature Association prize, the Perkins Prize from the International Society for the Study of Narrative and honorable mention for Modern Language Association’s James Russell Lowell Prize.

“I’m honored to receive this recognition; but there is so much entrenched resistance to recognizing the formative role the study of race has had in literary study,” Goyal said. “So what I find especially gratifying is that it’s recognition not just of my work, but of the vitality of this body of literature that I’m tracing and the fields that I work in.”

While it took about five years to write the book, Goyal had long been reading into and researching this area of literature in tandem with her work at UCLA.

“I felt like I already had a kind of repository of knowledge, which was incredibly helpful; some of it was through teaching, some of it was just kind of a longstanding interest in the subject,” she said.

Since she arrived at UCLA in 2004, Goyal has consistently taught a class on slavery from many different lenses, and has been astonished to watch the growth of literature discussing the subject.

“So there’s just been a massive return to the historical moment of slavery, and especially fiction that takes the shape of a slave narrative, the 19th-century genre,” she said. “I’ve been teaching this for a very long time, and I wanted to understand what that recent resurgence of interest in the subject meant both for the African American literary tradition, but also what happens when this form gets globalized in the last 20 or 30 years.”

The heart of Runaway Genres tackles exactly that.

“We’ve tended to study these different literary traditions separately. I’ll teach, you know, Black British literature or the Caribbean novel or the African novel, so we separate them out,” Goyal said. “But in the field, we understand that culture always overflows national boundaries and that there’s such intense transnational traffic in terms of ideas.”

Her current project is a monograph on 21st-century refugee literature, discussing patterns of migration across the African diaspora in the contemporary world, but also both aesthetic and political questions that are posed in modern times, taking a broader geographic scope approach compared to Runaway Genres.

“I feel fortunate and gratified,” Goyal said, “But for me, more important is the recognition of the fields that I work in and the extraordinary achievements of the writers whose work I am describing and drawing upon.”