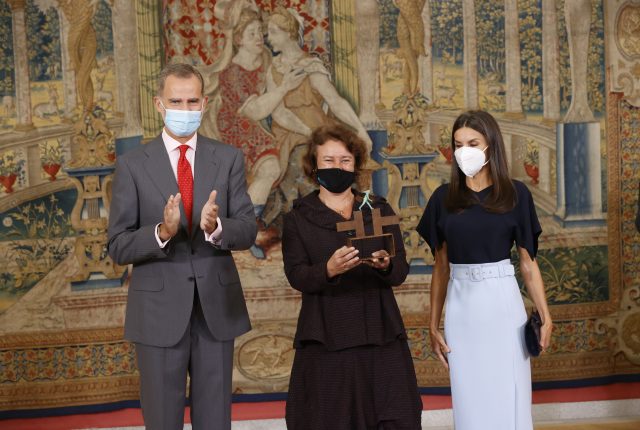 Barbara Fuchs, is the first recipient of the Ñ Prize, an award created to honor individuals who have promoted Spanish language and culture internationally.

The Ñ Prize was created by the Instituto Cervantes, a Spanish public institution created in 1991 with the intent to promote the Spanish language through education and use of the language and to encourage the spread of Hispanic cultures globally. The Instituto Cervantes is also currently planning to open a branch in LA. The introduction of the Ñ Prize also aligns with the 30th anniversary of the institution.

Fuchs, a professor of Spanish and English, said she received an email in May from the Instituto Cervantes notifying her that she had won the award.

“…this was a prize to be given to someone who helped promote Spanish language and culture abroad, and that I was to be the first recipient so that was super exciting,” said Fuchs.

In July, the president of the Spanish government and the director of the Instituto Cervantes along with other officials travelled to Los Angeles and a ceremony was conducted at UCLA where they announced the prize, said Fuchs. They also discussed the significance of the new branch in LA and the possible opportunities for collaborations with UCLA, she added.

Fuchs received the physical award at an award ceremony in Madrid in October from King Felipe VI of Spain, the honorary president of the Instituto Cervantes Board of Trustees. The ceremony took place at the annual meeting of trustees. Attendees included the King and Queen, the president of the Spanish government, a number of ministers and the director of the Instituto Cervantes, she said.

Fuchs was chosen from three candidates proposed by the director of the Instituto Cervantes, Luis García Montero, and was confirmed as their prize recipient at the Cervantes Board of Directors meeting held May 19.

Fuchs has had several notable achievements including serving as the director of the Center for 17th and 18th Century Studies and the Clark Memorial Library. She has written numerous books and previously served as an  editor of Hispanic Review.

“The award is for everything from my own individual research to this work to promote Hispanic classical theatre, but this is the project nearest my heart, and I also am very committed to the public humanities and to outward- facing work,” she said regarding the award recognizing her work with Diversifying the Classics at UCLA.

Fuchs said the motivation to start the Diversifying the Classics project began when she was the director of the Center for 17th and 18th Century Studies and the Clark Memorial Library. During her time as the director she was eager to bring performance to the gardens there, in particular through the Arts on the Grounds program. Fuchs started looking at which companies were doing work that was portable or site-specific and noticed there was a lot of Shakespeare in the Park.

“I always say that’s when the seed was planted,” she said. “Why couldn’t there be also occasionally Lope in the Park, or Sor Juana in the Park? Why was that not the case?”

One obstacle, she realized, lay with accessibility to translations for these plays, so she formed Diversifying the Classics to produce more translations.

“One of the things that’s really distinctive about the tradition is the centrality of women to it, because there were actresses in early modern Spain, as opposed to in Shakespeare’s England, and they were allowed to act on the commercial stage,” Fuchs said. “The plays often suggest just how strategic women were about navigating the strictures of patriarchy. So whereas a simplistic version might say, here’s a society that was very conservative, the church was very important, all of these things were forbidden to women; the plays actually show women taking tremendous agency and figuring out how to navigate that.”

According to the Diversifying the Classics website, the project has led to translating one play per year since January 2014 with additional plays translated by individual members of the workshop.

Since 2018, the project has also run LA Escena , a festival of Hispanic classical theater, which occurs every two years. The second, in 2020, was held entirely virtually. The project also involves outreach to high schools in LA and a newly launched podcast series that records plays and conversations with actors and expert researchers.

“We really are trying to think in the largest possible terms about how to get to something like the currency of Shakespeare in the United States” Fuchs said.  “How do you make room for a set of classics that is more diverse, and that reflects other traditions?

The Ñ Prize from the Instituto Cervantes allows for greater avenues to open for this project, she said.

Having the Instituto Cervantes in LA itself brings the possibility of collaboration and the opportunity to reach more people in the community and give greater visibility to their work. Additionally, Fuchs said she is excited for the future as UCLA is currently seeking Hispanic Serving Institution recognition.

“We are very committed to the sense that these are plays for everyone, (and) that they are not just for Latinx populations,” she said. “The reason they’ve survived for hundreds of years is that they really have a lot to say. At the same time, they are especially meaningful for Latinx and Spanish-speaking populations in California today.”