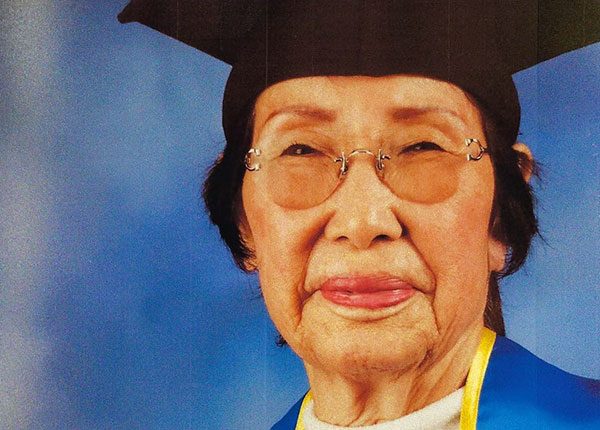 Simone King graduated from UCLA in June 2019 at the age of 82 with a bachelor’s degree in Korean Studies.

Achieving this life goal was no easy feat, and there are numerous life events and milestones that led Simone to become the individual she is today. After witnessing both World War II and the Korean War, running over 10 marathons and so much more, these life experiences enabled her to exhibit tremendous strength and use it as a life tool.

“A lot of people don’t live through two wars, and this experience has given me the strength to finish everything that I set my mind to. As an individual, my character is composed of discovery and actualization. Once I acknowledge my abilities, I prove to myself and to everyone else that I can do it. I don’t have regrets or think ‘I should have done this’ because when I set a goal in mind, I work hard to finish everything before I move onto something else so that it doesn’t fog up my head.”

Simone immigrated to the United States in 1967 from South Korea and settled down in Los Angeles.

She started as a psychology major at Pierce College in the mid-1970s because she was really interested in learning how to raise her children based on how they grow and develop. In 1988, she transferred to UCLA and in 1989, she left to raise her children and also work as the vice president of King’s Developmental Corporation, her husband’s housing community in Bel Air.

Over the years, Simone has accomplished a variety of goals and positions in both her personal and professional life. She worked as a professional fashion designer in L.A.; was the CEO of DASAN INc.; exported herb (“Euvila”) products; won first place for her painting at the Korean Day Festival (1994); was a contracted writer in various countries for Korean magazines (1984-86); founder and first president of the Korean Intermarriage Society (1975); Co-founder of the Korean Family Counseling Center; board member of Southern California Psychoanalytic Institute Auxiliary; board member of FHAW; member of Las Donas UCLA; on the Board chairing a section in the UCLA Faculty Women’s club; and has three children and five grandchildren including one adopted.

She returned to UCLA in 2000 to complete her degree but left shortly after the death of her husband, Dr. Peter D. King. After his death, she worked to publish her husband’s autobiography titled The Voice of Genius is Soft in 2003 and presented the book at the Southern California Psychoanalytic Institute.

Although Simone ultimately decided to pursue a degree in Korean Studies at UCLA, her interest in psychology remains, especially since she started researching the psychology behind K-pop. South Korea’s history is passed down through the generations and many people suppress feelings of depression regarding their country’s past. Through her research, Simone discovered how K-pop is a way for the younger generation to rise up from the pressures of the past and continue to move forward.

Simone as a Student at UCLA

Simone’s age never stopped her from pursuing her education, and she never feared other people’s opinions regarding her age.

“I have such a desire to learn in different areas. I didn’t explore much in South Korea and it’s a privilege to live in a country like the United States where older people are able to be really involved in the community. I feel so thankful to attend school where I can connect with young minds, become enriched by technological changes, and provide myself with tools for life.”

She also found that making genuine connections between herself and her classmates made her experience at UCLA even more rewarding.

“Connections are very important. I was able to connect with new technology with the help of my younger peers. Even though I am two to three generations away from today’s college age students, I open up and I’m not afraid of talking. We were all able to learn so much from each other through our group studying, open conversations, and shared advice.”

One of Simone’s Korean Studies professors, Professor Jennifer Jung-Kim, met her back in Summer 2016 in a Korean film course she was teaching. The two continued to keep in touch after Simone enrolled in her independent study course in Fall 2016 and a Korean history course in Winter 2018.

Professor Jung-Kim described Simone as one of the most engaged and talkative people in the class. Her naturally outgoing nature allowed her to share her life experiences with the class and also form connections between herself and her classmates.

Over the course of these three years, Simone has taught Professor Jung-Kim a lot about perseverance and hard work.

“What I most admire about Simone King is that she never gives up. We all could learn from her perseverance. She was a marathon runner, and that comes through in her studies as well. She may not be a sprinter, but you can count on her to cross the finish line. I hope by reading about her story, younger students will be inspired to also work hard and finish what they start.”

After graduation, Simone has plans to remain physically active and take the time to create art. In junior college, Simone took a lot of art classes from pottery to painting. Creating something from nothing and making art that is useful to the world are two aspects about art that Simone really loves. As for athletics, she enjoys running, hiking, and playing tennis.

Although she’s not deeply involved in anything scholarly yet, she has experience publishing and marketing books from when she published her husband’s autobiography back in 2003. She’s considering to write a book about herself, as she feels that writing makes you mature and deepens your heart.

Lessons We Can Learn From Simone

Developing and sticking to her goals helped Simone succeed not only in academia, but also within life in general.

“Keep pursuing your goals, but before you make them, make sure you can actually do them. Reaching your goals will not happen overnight, you have to work really hard to do whatever it takes to get out there and conquer them.”

One of the greatest lessons that Professor Jung-Kim learned from Simone is to not put a “best by” date on yourself.

“Age is just a number. You are as young as you feel. Don’t let other people tell you what you can or can’t do. Take the world head-on, but that doesn’t mean you shouldn’t ask for help when you need it. These are some of the lessons I’ve learned from Ms. King, and I wish her many more years of good health and happiness.”

The Humanities Division would like to congratulate Simone on graduating from UCLA. We wish her the best of luck with her future endeavors.