Q&A with Maite Zubiaurre about her short documentary Águilas, recently shortlisted for the 94th Academy Awards 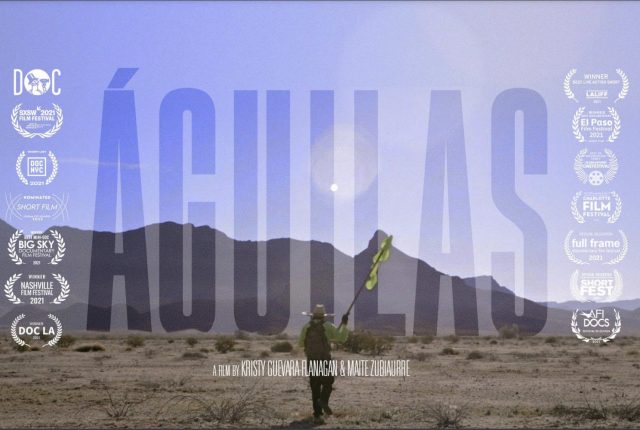 We sat down with Maite Zubiaurre, a professor in the Department of European Languages and Transcultural Studies (ELTS) and the Department of Spanish and Portuguese at UCLA, to discuss her short documentary Águilas, recently shortlisted for the 94th Academy Awards in the documentary short category. Zubiaurre co-directed, co-produced and co-wrote it with Kristy Guevara-Flanagan, an Associate Professor at the School of Theater, Film and Television.

What does this recognition of Águilas mean to you?
Maite Zubiaurre: The recognition is very important to us because this is a documentary on a very important subject: migrant deaths at the U.S.-Mexico border. So what we intended was to give visibility and raise awareness about the humanitarian crisis at our border — though there are crises all along the different borders.

What inspired the documentary?
MZ: Águilas is part of a multi-pronged collaborative, interdisciplinary, scholarly endeavor called Forensic Empathy that I started in 2016 and have been leading since then. And the goal of Forensic Empathy is to raise awareness about the type of network of migrant care that is happening along the U.S.-Mexico and particularly southern Arizona border. The whole project started with a scholarly monograph that I am co-writing with Jonathan Jae-an Crisman. But the urgency of the matter was such that I thought that we needed to look for another way. So I approached my UCLA colleague Kristy Guevara-Flanagan, with the very specific idea of making a short documentary on one search and rescue group — Águilas del Desierto — and to film a search-and-rescue weekend mission by them. I am also co-producing and co-writing with Jonathan Jae-an Crisman a feature documentary this time called SIN NADA about the deep impact, grief and call for action that migrant death provokes in rural Mexico. The directors (and also co-producers and co-writers) are José Luis Figueroa, Omar Foglio and Paola Rodríguez, from the Los Angeles Area-Emmy-awarded Tijuanan film collective Dignicraft. And there is a collaborative artistic installation on female migrant death, Mujer Migrante Memorial (MMM).

What do you hope the documentary will bring to the future of this area of study?
MZ: We want Washington to see this, because the ultimate goal is to effect policy changes. In 1994, the government created a set of policies to fortify and militarize the urban crossing points, forcing migrants to cross through dangerous terrain, like deserts or rivers. And that had the dire consequence of many migrants dying. Águilas wants to help revert those policies and the deliberate killing of migrants, because of course they knew what these policies would “accomplish.”

What do you hope that the average viewer will take away from Águilas?
MZ: To understand that the desert of Arizona and our borderlands are not only a beautiful landscape, but a weapon in the hands of politicians, and that we cannot remain indifferent to this reality. The desert showcases absolute visibility in regards to migrant death. In his absolutely fundamental book, The Land of Open Graves. Living and Dying on the Migrant Trail (University of California Press, 2015) UCLA Anthropology Professor Jason de León talks about what our documentary shows: how you stumble upon human skulls and bones in the Arizona desert. So there is this utter visibility coupled with the fact that society refuses to see that many migrants die on our borderlands. Águilas is also geared to younger generations who will hopefully change the future of this country.

Anything else you’d like to add?
MZ: I want to emphasize the heroism of the Águilas del Desierto: fueled by humanitarian action and by idealism, their goal is to save lives and bring peace to families by looking for the remains of migrants. They are also migrants themselves — domestic workers, construction workers, gardeners, etc. — of humble means who work very hard in physically demanding jobs. Rain or shine, they devote at least one weekend a month to travel the seven hours it takes to arrive at the Arizona desert from California with basically no sleep, and engage in these search and rescue missions that take a whole week. They’re doing what the government should be doing, but with practically no resources and no institutional help whatsoever.

To learn more about Águilas, you can watch the documentary here.