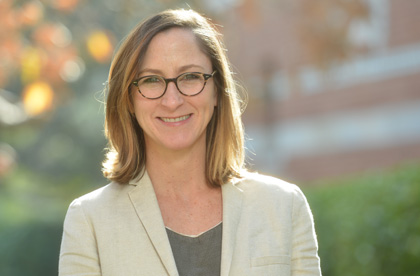 Feelings of grief and despair were felt across the globe on Monday, April 17, 2019, when a devastating fire erupted at Notre Dame Cathedral. Individuals around the world collectively mourned the state of the 850-year-old Paris landmark, posting photos and exchanging memories of the cathedral.

After officials began to assess the damage, it became clear that it will take multiple experts to develop a plan to restore and rebuild the structure, including conservators, engineers, and art historians.

Meredith Cohen, associate professor of medieval art and architecture in the UCLA Art History Department, is a specialist in Gothic architecture of Paris and high medieval Europe (c. 1000 – c. 1450). Below are some statements that she gave to various media publications regarding the Gothic building’s significance and the complicated question of how to rebuild and restore Notre Dame.

Cohen explained to Slate that the building is “the origin of our concept of Paris as a center of art and culture.” It was constructed over the course of three centuries, beginning in 1160, and “symbolically transformed the city into the center of European culture during the medieval period through its display of the new and innovative Gothic architecture and its singular architectural and artistic ambition.”

Not only did Notre Dame symbolically and culturally transform the city, but it also represents “an extraordinary feat of mankind” because it was built by hand during a time without heavy machinery. Cohen also notes that the building was “a kind of utopian vision for people in the Middle Ages, and they really wanted it to last forever.”

With most of the building’s structure still intact, Cohen told Slate that the cathedral itself is “the artwork” and that “all the other works of art attached to church are different details of it.” She expressed concern over the loss of the “Forest,” the cathedral attic’s wooden frame with beams that were each made from an individual tree.

Speaking to National Geographic about the wooden structure, dating back to the 12th and 13th centuries, Cohen added that it was a “rare example of medieval engineering.” She also stated that the cathedral’s choir might be missing some key features, including some sculptures and graffiti that medieval worshippers etched into the choir stalls.

In her LA Times response to the current debate on how to rebuild and restore the iconic cathedral, Cohen puts forth another question to consider: “Should you fake history or create something of our time?” She suggests a design that acknowledges the building’s status and relevance in the 21st century, which could mean replacing the 19th century spire with something different instead of replicating it. As a more modern addition to the cathedral, Cohen reminds the public that this spire is a piece of the cathedral’s layered history. “A carbon copy is a false history because you can’t re-create the past. It would still have a completion date of 2019.”

The question of how to rebuild and restore the iconic Notre Dame Cathedral will not be answered overnight. As a symbol of Paris’ history, this process will require a collaborative effort between various experts and stakeholders looking to preserve the history and cultural significance of this beloved architectural structure.

The Humanities Division would like to thank Professor Cohen for sharing her insight with the public in the aftermath of this destruction.