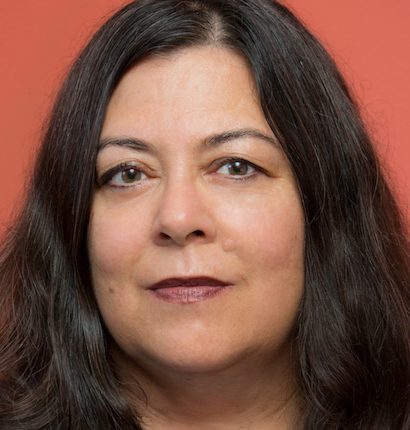 UCLA Art History Professor Charlene Villaseñor Black was recently awarded over $1,000,000 in funding as a winner of the 2019 Multicampus Research Programs and Initiatives (MRPI) competition. MRPI funding encourages innovative research collaborations across UC campuses that lead to cutting edge discoveries in areas that are important to UC, California, and the global society.

Professor Villaseñor Black and her colleagues Professor Jennifer Hughes (UC Riverside), Professor Amy Lonetree (UC Santa Cruz), and Professor Ross Frank (UC San Diego) were one of sixteen awardees selected from the 179 applications to receive funding for their project titled “Critical Mission Studies at California’s Crossroads.” This project is intended to radically transform our knowledge of California’s 21 Spanish-Indian missions, created between 1769-1823 by Native labor, and is also designed to create a new field of studies, Critical Mission Studies, that takes into account Native American and Chicana/o perspectives.

According to Villaseñor Black, Critical Mission Studies research “emerges from the premise that colonization works as a process, that ‘settler colonizers come to stay: invasion is a structure not an event,’ and that diverse communities in California continuously negotiate and make meaning in relation to the present, history, and legacy of the Spanish/Mexican mission system in California.”

“We question the ‘Spanish fantasy heritage’ view of California’s missions as we focus on both quantitative, data-driven new studies and new interpretations. The timing for confronting and reconciling California’s difficult history is now. Controversy over the 2015 canonization of Father Junípero Serra simultaneously united and surfaced tensions between the Native and Mexican‐American communities in California. CMS research seeks to bridge these disciplinary divides using a relational ethnic studies lens, uniting Native American Studies and Chicano/a Studies, and California Studies and Mexican Studies, fomenting new narratives of California history in which everyone has a place.”

This innovative project and creation of a new field of studies originated with Professor Hughes, who, like Professor Villaseñor Black, researches Mexican and Mexican American Catholicism.

Villaseñor Black is very happy that the reviewers recognized the potential of their project, and the group is “so happy to have this funding and the opportunity to make a difference in California because it’s extremely difficult to get this grant in the humanities since most of the money goes to science and medical research.”

The team hopes their research will create a history of California’s missions that is factually accurate and that accounts for all voices in the state, with particular acknowledgement of the Native peoples on whose land these missions stand. Villaseñor Black clearly remembers the history of the missions taught to her son when he was in fourth grade, and she hopes that they can change that. They are also optimistic that the methodologies and theoretical frameworks they create will be useful in other states with missions, such as Arizona, New Mexico, and Texas.

As an art historian, one thing that Villaseñor Black is really excited about is the opportunity to uncover little known material objects from the missions as well as examine the archival documents from the colonial era related to the missions.

“A few years ago I discovered three previously unrecognized important Mexican paintings in San Juan Capistrano — an Immaculate Conception by Mexican colonial master Miguel Cabrera, and two paintings by José María Vasquez; all were signed! To foster this new research we’re planning 5 humanities labs, with teams of researchers (including undergraduate and graduate students), at 5 different missions working with the local communities. Researchers will also engage in cultural studies oriented to the present to observe public ritual, cultural, and political practices anchored in or around the missions. Potential topics include Deer Dances held each Lent; the return of the swallows on St. Joseph’s feast day at San Juan Capistrano; Catholic pilgrimage practices, such as celebrations of the infant Jesus that draw tens of thousands from across the country (Niño de Atocha in Santa Paula, CA); and more generally, the missions as foci of faith for immigrant and cultural communities, sites of protest, sites of conscience and memory making.”

The project, which will take place at the California missions, as both physical sites and loci of interpretation, will be centers for the training of undergraduate and graduate students as field researchers, public historians, art historians, archaeologists, curators, and preservationists. One of the project goals is to foster interest in California Indian curation and museum studies, including marshalling resources to train tribal historians.

“We’re hoping to offer funding to four graduate students per year, one from each participating campus. They will participate in our collaborative humanities research labs, summer field schools, and as co-authors or authors of publications. We are also offering funding to undergraduates writing honors theses, hoping to train them to go to graduate school; they will be included in the humanities labs, field schools, etc. All of us are committed to teaching this new research in our classes, either revising existing courses or creating new ones.”

Passionate faculty members like Professor Villaseñor Black and her colleagues, who are dedicated to pursuing innovative research that will radically transform the state of California and the global society, are one of the reasons why UC is the leading public research university. This team is one incredible example of the type of groundbreaking research, cutting-edge discoveries, and theoretical frameworks that UC strives to encourage.

List of journal articles that Villaseñor Black quotes in her answers: