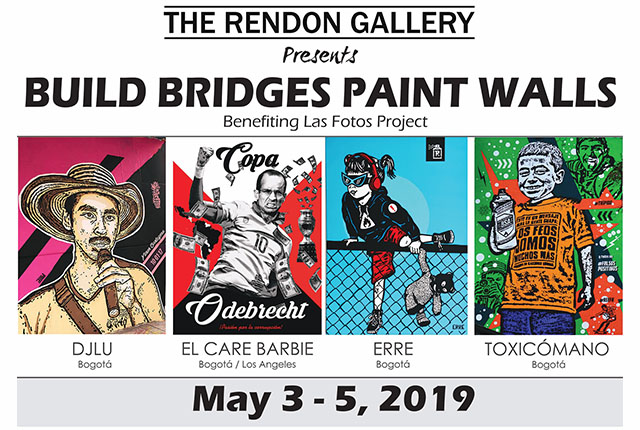 Build Bridges, Paint Walls is a project hosted by the UCLA Arts Initiative and the Department of Spanish and Portuguese taking place from April 29 to May 5. The event will feature a documentary screening, the 16th Annual Spanish and Portuguese Graduate Student Conference, community programming, and an art exhibition at the Rendon Gallery. All events will be free and open to the public.

The project director, Kristal Bivona, and the project coordinator, Isaac Gimenez, are both Ph.D. students in the Spanish and Portuguese Departments. Bivona will be graduating in 2019 and her research focuses on representations of transitional justice in South American cinema following the end of dictatorial regimes in the 1980s. Gimenez is a fourth-year graduate student who studies contemporary Brazilian poetry, and is particularly interested in marginal poetry, identitarian discourses and circulation.

As project director, Bivona applied for grants through the UCLA Arts Initiative with the help of Maite Zubiaurre, Professor of Germanic Languages and Spanish & Portuguese. While she was planning the annual conference, Bivona wanted to invite Colombian street artists as keynote speakers and brainstormed different ways to expand their trip to the U.S. and create a broader impact on the Los Angeles community.

The Inspiration Behind the Event

What started out as an annual conference eventually became a week-long program that will have a greater impact on not only the academic community, but the entire city of Los Angeles. The Department of Spanish and Portuguese is in a unique position to build bridges between UCLA and the LA community, and through education, this project will allow the department to communicate with Spanish-speaking communities and act as advocates for Latin American culture and art.

The title of this project, “Build Bridges, Paint Walls” is a response to Trump’s immigration policy and the refrain “ build bridges, not walls.” With all the Latinx and immigrant communities in LA, the team wanted to encapsulate this idea by literally painting walls across the city.

The artists who will participate in all events are DJLU/JuegaSiempre, Erre, and Toxicómano from the collective Bogotá Street Art. Bogotá is an exceptional city to highlight because of its street art culture and burgeoning tours on graffiti and street art. Exploring Bogotá’s street art will allow attendees to study the socio-historical context of the city and bring Bogotá into conversation with LA. The programming will highlight the street as a space of creation and the relationships that are built between activists, creators, residents, tourists, political leaders, and other individuals.

Taking It to the Street: Politics, Aesthetics, and Representations of the Street

The annual conference, taking place on April 30 from 9-6 pm, will explore different urban geographies, cultural landscapes, and voices from the street from diverse perspectives. Some topics that will be covered include the street as a forum of political debate, academia and the street, public space, gentrification, and the streets as a place of collective memory. DJLU, Erre, and Toxicómano will be keynote speakers at the conference along with Dr. Érica Peçanha do Nascimento from the Universidade de São Paulo, who will discuss marginal literature from Brazil.

This year’s conference theme on street art is a way to provide a creative space for non-academic artists, academic artists, and activists in order to encourage social movement and change. The team hopes that by including keynote speakers who aren’t involved in academia, attendees will understand the academic implications of street art and potentially garner more interest in the conference by making it more interdisciplinary.

The conference will mainly take place in Spanish and Portuguese, however the two keynote addresses and all panels will feature a simultaneous interpretation into English by Antena LA. This allows for the principal of language justice by ensuring that there is no dominant language, rather everyone can converse together and listen in any language.

The other on-campus event will be the Cine y Arte Callejero/Documentary Screening which will feature films selected by the various artists. The films, ranging from two minutes in length to more in-depth documentaries, display a panorama of street art through the lens of artists. DJLU, Erre, and Toxicómano will host a panel discussion after the documentary screening.

As for the off-campus events, Colombian muralists DJLU, Erre, and Toxicómano will be painting murals in South LA through the support of Smile South Central and Graphaids Art Supply.

Build Bridges, Paint Walls will also offer two private workshops at Las Fotos Project, a non-profit organization that inspires teenage girls through photography, mentorship, and self-expression. The first workshop will be on stencil-making taught by DJLU, Erre, and Toxicómano, and the second workshop will focus on applying to college, hosted by the UCLA student group, First Gen Latinx.

The culminating event, art exhibition at the Rendon Gallery, will feature murals, graphic art, photography, and works from DJLU, Erre, Toxicómano, El Care Barbie, and the Las Fotos Project. This event will have its opening reception on May 3 with a performance by Deseos Primitivos, a DJ set by Skwirl Sauce, and food and beverages.

Executing an event of this size requires extensive planning and coordinating. One of the most challenging aspects of creating this project was managing the budget for this large scale event.

“This was the first time as graduates students that we’ve put on a lot of different events in a short amount of time. The dimension and scale of this event is a lot larger than what we’re used to. We’ve held the conference before, but it was challenging to arrange funding and sponsors for the community events and gallery exhibit. Even managing all the different languages and expectations has been more complicated than in the past because the conference is on such a larger scale.”

For Bivona, the most rewarding aspect has been working with people outside the university, building bridges with the local art scene, and developing relationships with people from Colombia and Brazil. Similarly, Gimenez is amazed by how the project has materialized over time and has enjoyed working with a lot of different people to create this project.

The team hopes that through this event, people learn about street art and recognize it as a valid art form. Since the art is located in the street and anyone has public access to it, the art and its powerful messages are able to reach a broad audience. While celebrating this creation taking place in the streets and validating its power in sparking activism, the team is optimistic that this event will also support the immigrant, Latinx community in Los Angeles at a time in history when it’s crucial to be in solidarity with our neighbors.

All events will be open to the general public. If you’re interested in attending the Rendon Gallery exhibition, you can RSVP on the Eventbrite page.