Skip to main content
Home » Faculty / Department » Art as a Means of Getting Outside Ourselves, Art History Professor Charlene Villaseñor Black on Teaching Her Students

Art as a Means of Getting Outside Ourselves, Art History Professor Charlene Villaseñor Black on Teaching Her Students 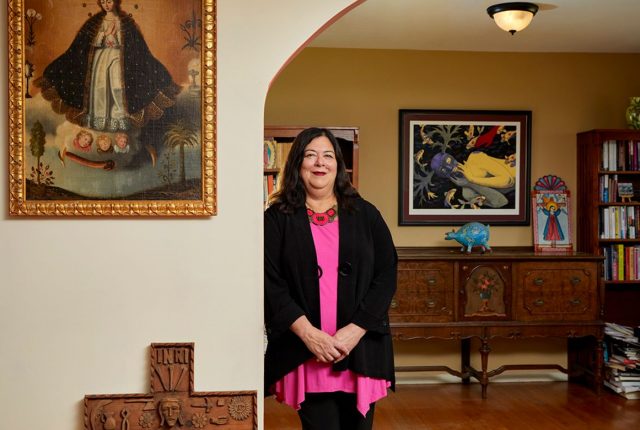 During a trip to Mexico when she was 15, Charlene Villaseñor Black wandered into the Church of Santa Prisca y San Sebastián in Taxco. “I was dazzled by the 18th-century interior, with Baroque paintings and gold retablos [devotional works] perfectly preserved,” says the Arizona native, now a professor of art history and Chicana/o and Central American studies at UCLA.

At that moment, Villaseñor Black, who is Mexican American, knew she wanted to become an art historian. Today, she specializes in the art of the early modern Iberian world as well as in contemporary Latino art. Recently, she has focused on how the work of Chicana/Chicano artists can influence viewers’ thinking on issues of immigration along the U.S. southern border.

How can art shape our views of the world and other people?

I’m always asking myself, how do works of art produce meaning, or how do we understand them? Art is a means to get outside ourselves, to connect with something larger, to visualize our shared humanity. The representational visual arts can immediately affect people’s thinking in deep and profound ways. Art humanizes people and can provoke empathy in the minds of viewers in a visceral way that language or a news story on television can’t. A deep engagement with a work of art is more powerful. It draws us in in an emotional and immediate way. We learn stories from visual images.

With so many issues in our country right now, why focus on immigration in particular?

I have a personal connection. My grandmother’s family on my mother’s side came to the U.S. from Mexico in 1923. They crossed over the border and were detained with all their children in the first detention center, which was built in Laredo [Texas]. I didn’t hear that story from my mother until 2015, as I was organizing a conference on Central American migration at UCLA’s Chicano Studies Research Center. I immediately felt a personal link to their struggle and that of everyone who has come after them. I have also worked as a volunteer translator for asylum seekers from Central America and heard their stories and seen their struggles firsthand, so a lot of interests lined up for me.

When did you start to see that art might sway people’s views on immigration?

As a professor and researcher, ethics is at the forefront of my work. Certain political moments have made an impact on me, particularly the recent migration crisis on our southern border. I thought, what can I do to make a difference in the face of this suffering? I know the visual arts have a powerful role to play in bringing us together.

“These portraits have the power to change minds in the immigration debate in the United States.”

How did you answer your question, “What can I do?”

Like many other people, I volunteer and financially support organizations I believe in, but I felt that there was a disconnect between my ethical commitments and what I was doing in the classroom and in my research. I wanted to breach that divide. I know that art has the power to change minds, and I now see myself as an advocate for that in the classroom. I want my students to understand that the arts can change them — that the arts can do good.

What is an example of art that you thought sent a powerful message about immigration?

Just before the COVID shutdown, Chicana artist Sandy Rodriguez took me through an exhibition of her work, which was portraits of children who had died at the southern border. I had seen the children in the news, so their faces were familiar to me. But I was interested in the visual strategies she chose to humanize them. I compared her portraits with photographs of the subjects. She made their eyes large so they would connect with us, with their gaze looking directly at the viewer. She moved them up close in the picture plane so they seem to engage with us, they seem alive.  She also marshaled certain resonances of sacred art.

This language of sacralizing and memorializing the dead is such an important part of Mexican American culture,  as we know from celebrations of Day of the Dead, or Día de los Muertos. It’s a ready framework to humanize the deceased. Transcendence is a universal value that we all seek. These portraits have the power to change minds in the immigration debate in the United States.

Being influenced by art requires access to it. What about people who don’t go to museums and galleries?

I’m trying to bring artists’ work to everyone’s attention and promote the importance of visual art and how relevant it is. Public art plays an important role. Religious art was early public art, especially during a time of low literacy rates. And over the centuries, there has been a lot of public Chicana/Chicano art — particularly as murals, much of it with a clear political message, based on the belief that art can effect political change.

A contemporary example is Judithe Hernández’ 24 mosaic murals, L.A. Sonata, at the Downtown Santa Monica terminus Metro station. The image is her vision of the city of L.A. She takes the seasons and the times of the day — which are canonical Western themes, going back to ancient Greece and Rome — and gives them a multicultural twist that reflects California and L.A. and our history here. She is suggesting that this is a place for all of us, and how important this cultural melding is in our city.

I am deeply committed to the importance of the arts and humanities, and concerned at what’s been happening to them in the university — that we’re more focused on STEM or the social sciences. I have been increasingly concerned about the lack of funding and the way humanities departments are shrinking.

The humanities — art, music, literature — are what make us human, what allow us to access transcendence and what enable us to imagine new futures. Artists have always been on the cutting edge of new developments. I love how they help us envision and bring into being a new, more just world.