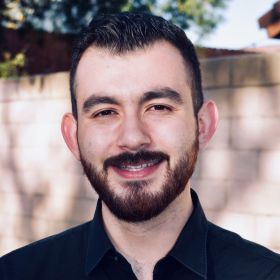 Armando Guerrero, a Lecturer and Academic Coordinator in the Department of Spanish and Portuguese, recently analyzed the accents of actors in famous movies and TV shows for the social media company Pero Like to see if the actors linguistically achieved the Latinx identity in the portrayal of their role.

Buzzfeed’s Pero Like is a Facebook and Youtube channel that “makes content that resonates with English-speaking Latinxs.” Guerrero’s video, featured on a platform with over 1 million subscribers, explores the various linguistic representations of Latinx identities in film and TV, and addresses the lack of representation by an actor or actress of the Latinx identity that is featured in the film or show.

Guerrero first analyzed Catherine Zeta-Jones’ Spanish accent as Elena in the film The Mask of Zorro. He notes that she does not portray a native Spanish speaker based on the pronunciation of her consonants, specifically the letter “t.” In English, the “t” sound is very explosive with an aspiration while the “t” sound in Spanish sounds more like the English “d” sound. In her dialogue, Zeta-Jones keeps the English “t” sound instead of the Spanish “t” which makes her Spanish accent sound less authentic.

The next actor that Guerrero reviewed was Cliff Curtis, a New Zealand actor portraying a man called Smiley in the film Training Day. Curtis’ Spanish accent is one of the best accents that Guerrero analyzes during the video because he does a lot of things correctly. Unlike Zeta-Jones, he pronounces his “t” sounds as if he was someone heavily influenced by Spanish. However, the accent as a whole sounds more like Chicano English or East L.A. Chicano English, a dialect of English that is its own variety or dialect, like African American English.

While the previous two clips were analyzing the actors’ Spanish accents when speaking English, the third clip features Brazilian actor Wagner Moura speaking Spanish in the TV show Narcos as Colombian Pablo Escobar. Since Moura typically speaks Brazilian Portuguese, he hits the linguistic mark when speaking Spanish based on the way he correctly palatalizes the first syllable of the word “tipo” instead of pronouncing it as “chipo” in Brazilian Portuguese. Although the intonation, the variation in spoken pitch, in the way he speaks Spanish is distinctly Columbian, Guerrero states that the overall accent is not authentically Colombian.

To sum up Guerrero’s assessment of Al Pacino’s Spanish accent in the movie Scarface, he says it is a “good movie, but [the accent] is so bad.” The film’s dialogue attempts Cuban syntax in the way that Pacino removes verbs and says “I not” instead of “I am not.” While the film tries to sound Cuban through the sentence structure of Pacino’s dialogue, Guerrero suggests that they could have done away with the consonant sounds instead to achieve a more authentically Cuban sound.

The final video that Guerrero reviews is a clip of Ronni Hawk, an American actress playing the role of Mexican-American Olivia on the TV show On My Block. The clip features Hawk speaking in English and Spanish, and from the way she speaks English, you can immediately tell that her native language is not Spanish. When Hawk speaks Spanish, she pronounces the word “boca” with an implosive “b” sound, demonstrating how Hawk is not a native Spanish speaker, nor is she a heritage speaker.

At the end of the video, Guerrero shares his final thoughts on the evolution of accents in film and TV. What Al Pacino did in Scarface thirty-five years ago would not be an appropriate accent today because it is based upon stereotypes. In contrast, Wagner is able to get into his performance despite being Colombian and not a native Spanish speaker because he does rely on stereotypes in his performance. Despite having actors like Wagner who portray a more authentic linguistic representation of these Latinx identities, Guerrero states that as a society, we are still not where we need to be. Instead of hiring any actor to play an individual with a Latinx identity, we need to have Latinx actors and actresses represent their identities on the big screen.