Todd Presner–Professor of Germanic Languages, Comparative Literature, and Jewish Studies–Appointed as Advisor to the Vice Chancellor for Research 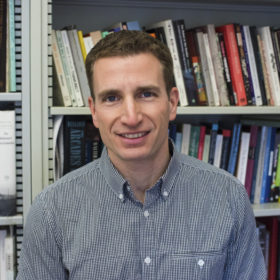 Originally published by the UCLA Office of the Vice Chancellor for Research on May 10, 2018.

I am pleased to announce the appointment of Professor Todd Presner as a new Advisor to the Vice Chancellor for Research effective July 1, 2018, for up to two years. Todd Presner is the Michael and Irene Ross Professor of Germanic Languages and Comparative Literature at UCLA and Chair of the Digital Humanities Program.

I have invited Professor Presner to serve in this official Advisor capacity to make sure I understand more about north campus research interests and needs, and he will serve as a liaison between the units in our office and north campus faculty. The timing of this appointment is fortuitous as Humanities Division Dean David Schaberg is appointing Professor Presner as Associate Dean of Digital Innovation.

While the Advisor role is new and will evolve during his tenure, topics that we expect to include in the portfolio include fostering collaborative, transdisciplinary research and creative activities, increasing the capacity of such activities, advising on the development of computational research infrastructure/experimental laboratory spaces for north campus disciplines, and becoming more involved in advocacy for national funding for the Humanities and Arts (NEH, NEA) through Federal Relations.

Professor Presner served as the Sady and Ludwig Kahn Director of the UCLA Alan D. Leve Center for Jewish Studies (2011-2018) and is a co-PI on UCLA’s “Urban Humanities” initiative. He is the author, coauthor, or editor of five books, and his collaborative research and teaching projects have been awarded major grants from the Humboldt Foundation, the National Endowment for the Humanities, the MacArthur Foundation, the Haynes Foundation, the Keck Foundation, the Getty Foundation, the Mellon Foundation, and Google. In 2015, he served as the Chair of the University of California Press’ Editorial Committee, and he now serves on the Board of Directors of UC Press (2015-present).

While the role officially does not start until July 1, 2018, Professor Presner will begin meeting with faculty and campus leaders during the remainder of this academic year in preparation for the new role. Please join me in congratulating Professor Presner and welcoming him into this new role.