“Religious by Nature”: A Conversation with Center for Study of Religion Director, Professor Carol Bakhos 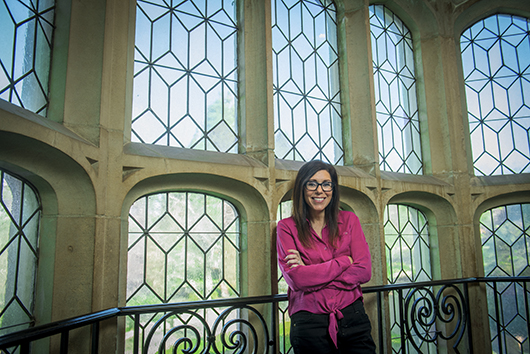 AS APPEARS IN UCLA MAGAZINE:

In these turbulent times, UCLA Center for the Study of Religion director Carol Bakhos does not see people losing their faith — but becoming increasingly interested in spirituality.

Carol Bakhos is a professor of late antique Judaism and Jewish studies in UCLA’s Department of Near Eastern Languages and Cultures. Born and bred in Brooklyn, New York, Bakhos says people are often surprised when she says she is not Jewish — she was raised Roman Catholic by her Syrian mother (who converted from Greek Orthodox) and Lebanese father (a Maronite Catholic). The author and editor of five books, most recently The Family of Abraham: Jewish, Christian, and Muslim Interpretations (Harvard University Press, 2014), Bakhos is a first-generation American whose first language was Arabic.

What brought you to UCLA?

I came in 2002 from Middlebury College, where I taught for four years. I jumped at the opportunity to work at a world-class, intellectually thriving university. As much as I enjoyed living in Vermont, I craved being back in a vibrant, culturally exciting milieu. In this respect, UCLA is a microcosm of L.A., with the added bonus of being less about Hollywood glitz and more about cutting-edge research and the cultivation of the life of the mind.

Why did you choose to study religion?

I actually didn’t set out to study religion. In fact, it never really occurred to me while I was in college that religion — or, for that matter, Judaism — would be a subject I’d dedicate my life to. My interests in literature and Gadamerian philosophy [Hans-Georg Gadamer was a prominent 20th-century German philosopher] led me to do a master’s degree at Harvard, where I was planning to study philosophy.

That, however, changed. I became interested in the relationship between ancient Judaism and the emergence of Christianity. The Jewish tradition is remarkably culturally rich and resilient. My longstanding interest in hermeneutics, epistemology and literature and my rapidly budding passion for all things Jewish converged in the study of Jewish biblical interpretation.

But I suppose it’s not all that surprising that I would gravitate toward studying religion. People fascinate me, and religion is about how people make sense of the world, how they engage with each other, how they attempt to grapple with pain and suffering, how they infuse life with meaning.

As a Catholic Arab, did you encounter difficulties studying Judaism?

When people learn of my background, they are usually curious. Most people think that I’m Jewish. It’s how I “tawk” — after all, I am from Brooklyn! Sometimes I am met somewhat suspiciously by [both] Jews and non-Jews, but more often than not, they seem to appreciate that I study a tradition other than my own. I did my doctoral work at the Jewish Theological Seminary [JTS] in New York City because I wanted to fully immerse myself in the Jewish tradition, not just as someone studying Judaism but as someone experiencing it. It was an incredible and challenging experience. I’m grateful to JTS for always making me feel like a bat bayt, like a member of the family.

Religion can be a very sensitive subject. What are some of the most important things you wish to impart to your students?

Most people assume that if you study religion, you yourself are religiously observant, but that is not the case. In fact, studying about religion requires a commitment to the rigor of academic standards, not to ecclesiastical piety. It is my hope that students not only deepen their knowledge of religious traditions, but also walk away appreciating the complexities underlying the study of religion and the religions themselves.

Religion is not just about how humans relate to God, however one conceives of God; it is also fundamentally about how we respond to what it means to be human in relation to each other, society, history, the universe. When we study religion, we study philosophy, art, history, sociology, literature, politics, psychology and anthropology. We address an array of questions about human nature, morality and mortality, about society and ritual practices, about history and tradition. Most of our students are exposed to some degree to Judaism, Christianity or Islam, so it’s important that they understand that there is a great deal of diversity within [each of] these three traditions — that no religious tradition, however it presents itself, is monolithic and homogenous.

It’s also important that they appreciate the varieties of religions beyond the more popular or familiar ones. The study of religion is not merely an exercise in fostering tolerance, but rather an exploration of diverse ways in which humans continue to understand the universe and their place in it.

Do you think Americans have become more, or less, religious?

With our new president in office, what do you see for the religious future of this country?

This campaign season was exceptionally brutal, and there is fear that we are experiencing the erosion of our common purpose and decency — that our mores and values have been compromised, that the stitching of our social fabric is irreparably frayed. And even though similar sentiments were expressed eight years ago by those who did not support Obama, lines have been crossed. There is a sinking feeling that today, more than ever before, the individual unequivocally takes precedence over the communal, and there is no interest in distinguishing truth from fiction. This makes many anxious.

The religious future of this country is not predicated on how one feels about the president or about the state of the country, but I suspect that anxiety about the loss of values we hold dear makes us become more introspective and causes us to turn toward others who affirm our values and beliefs, thus providing a measure of stability and comfort.

Whether one is religious or not, people seem to be increasingly interested in learning about the religions of the world. Our students are seeking to understand Islam and its relationship to Judaism and Christianity; they are studying about Hinduism and Buddhism; they are reading the Bible and Qur’an; they want to talk about theodicy, faith and suffering and the role religion plays in public policy. What better place to do that than here in Los Angeles, a microcosm of global beliefs and practices?