Inside Higher Ed Showcases Dr. Miriam Posner of UCLA As a Rising Star in Digital Humanities 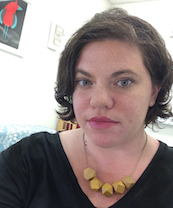 The digital humanities have supported a remarkable diversity of teaching, scholarship and service pursued by a diverse group of leaders who are shaping the field’s values and priorities. Inside Digital Learning here showcases the contributions of five rising stars of the digital humanities: Alex Gil, Lauren Klein, Marisa Parham, Miriam Posner and Jacqueline Wernimont. While no selection can represent the full scope of a field, these scholars represent the emergent and promising work within digital humanities.

“These scholars demonstrate again and again the promise of digital technologies for exploring the most crucial, critical questions in the humanities,” said Kathleen Fitzpatrick, who until recently was associate executive director and director of scholarly communication at the Modern Language Association.

“Their work asks us to think about the construction of race, gender, class, sexuality and nation through representations and absences in the cultural archive, examining that archive both in close detail and at massive scale, and using new forms of scholarly production and collaboration to draw others into the project as well,” said Fitzpatrick, now director of digital humanities and a professor of English at Michigan State University. “Their work shows the best of the digital humanities: digital and critical, inclusive and connected.”

Inclusivity can be measured in many ways, including diversity of practitioners, subject area specialization, roles and institutions. These rising stars include individuals who have been historically marginalized within the academy including women and people of color; traverse disciplinary boundaries of literature, film studies, black studies, communications, media and information studies; and work from both alt-ac and traditional tenure-track positions at public research, liberal arts and Ivy League institutions.

For five years, Posner has served as one of the leading practitioners of the digital humanities working from an alt-ac perch. Coordinating UCLA’s digital humanities program, she worked closely with students to create projects like early African-American cinema, Origin of the Species and the Getty Provenance Index, the latter of which earned her students a Sotheby’s Institute of Art Research Award.

“In my alt-ac job, I was lucky to have a lot of decision-making ability and latitude to define my own goals,” said Posner. “Having said that, alt-ac jobs often come with some distinct structural limitations.” (Posner described those challenges at greater length in an essay for Inside Higher Ed.)

Her recent promotion to assistant professor of information studies and digital humanities may redress those limitations and enable her to commit more time to collaboration and scholarship. Much of Posner’s work lies at the nexus of information studies and humanistic inquiry. Her study of data in the global supply chain draws upon software, platform and cultural studies. Her data trouble project reckons with the meaning and implications of “data-driven” humanities scholarship.

“I’m interested in materialist feminist work that takes critical race theory seriously. Many of the conventions of data visualization and data modeling assume a ‘neutrality’ that we know depends on a totalizing, imperialist view of the world,” said Posner.

“One of Miriam Posner’s insights was that rather than attempt to derive data from humanities works or practices, one could take existing data — with all its flaws and limits acknowledged — and ask humanities questions of it,” explained Johanna Drucker, Breslauer professor of Bibliographical studies in the department of information studies.

Posner anticipates greater specialization across the field she has helped to shape, but also that digital humanities will persist as an epistemological meeting space: “While a lot of us are asking questions that are specific to our own subjects, we’re also still asking, ‘OK, but what does this mean? What’s the right epistemological approach to computing and the humanities?’ I think as long as we’re still deciding this, DH will continue as a field.”