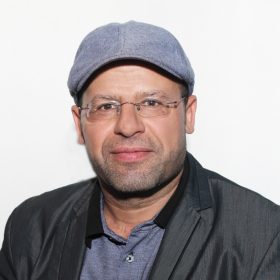 Nouri Gana, associate professor of comparative literature and Near Eastern languages and cultures, has been named one of 13 recipients of the 2017 New Directions fellowship from the Andrew W. Mellon Foundation. An accomplished scholar of the literatures and cultures of the Arab world and its diasporas, Gana becomes the fourth UCLA professor since 2006 to receive this fellowship.

The competitive fellowship allows faculty members in the humanities and humanistic social sciences to pursue training outside of their established areas of expertise, encouraging the highest standards of cross-disciplinary research. The fellowship covers training, salary and benefits up to a three-year period.

“Here at UCLA, we greatly value our culture of interdisciplinary study,” said David Schaberg, dean of Humanities. “Professor Gana is an outstanding faculty member pursuing research that will contribute to the vision of the Mellon New Directions program.”

For the past ten years, Gana has explored modernist Arabic culture, including literature, music and film, and their intersection with European culture and critical theory. He will use the New Directions fellowship to reorient his research and teaching toward modern Turkish.

A genuinely multidisciplinary scholar, Gana currently conducts his work in English, French and Arabic. The fellowship will allow Gana to undertake immersive language training in modern and Ottoman Turkish in Istanbul, Turkey, as well as intensive study of modernist Turkish literature, history and religion.

By expanding his focus to Turkish studies, Gana will become one of very few scholars to engage in the comparative study of modern Arabic and Turkish literary and cultural production.

“My intention is not simply to add another national literature to my areas of expertise,” Gana said. “I want to produce a qualitative shift in modernist studies toward comparison between non-European literatures, a shift that will transform our understanding of Arabic and modernist literature.”

Gana’s critically acclaimed first book, Signifying Loss: Towards a Poetics of Narrative Mourning (Bucknell University Press, 2011), explores the intersections between tropes of loss and political changes in modernist and postcolonial literatures. Building on his exploration of “Arab Melancholia,” he is interested in rethinking his approach as he investigates how Arab and Turkish writers and artists have negotiated modernity in the wake of the collapse of the Ottoman Empire.

Gana hopes that this new direction will enrich cross-disciplinary research and pedagogy across the Humanities at UCLA and have a lasting impact on the study of Arabic literature and culture.