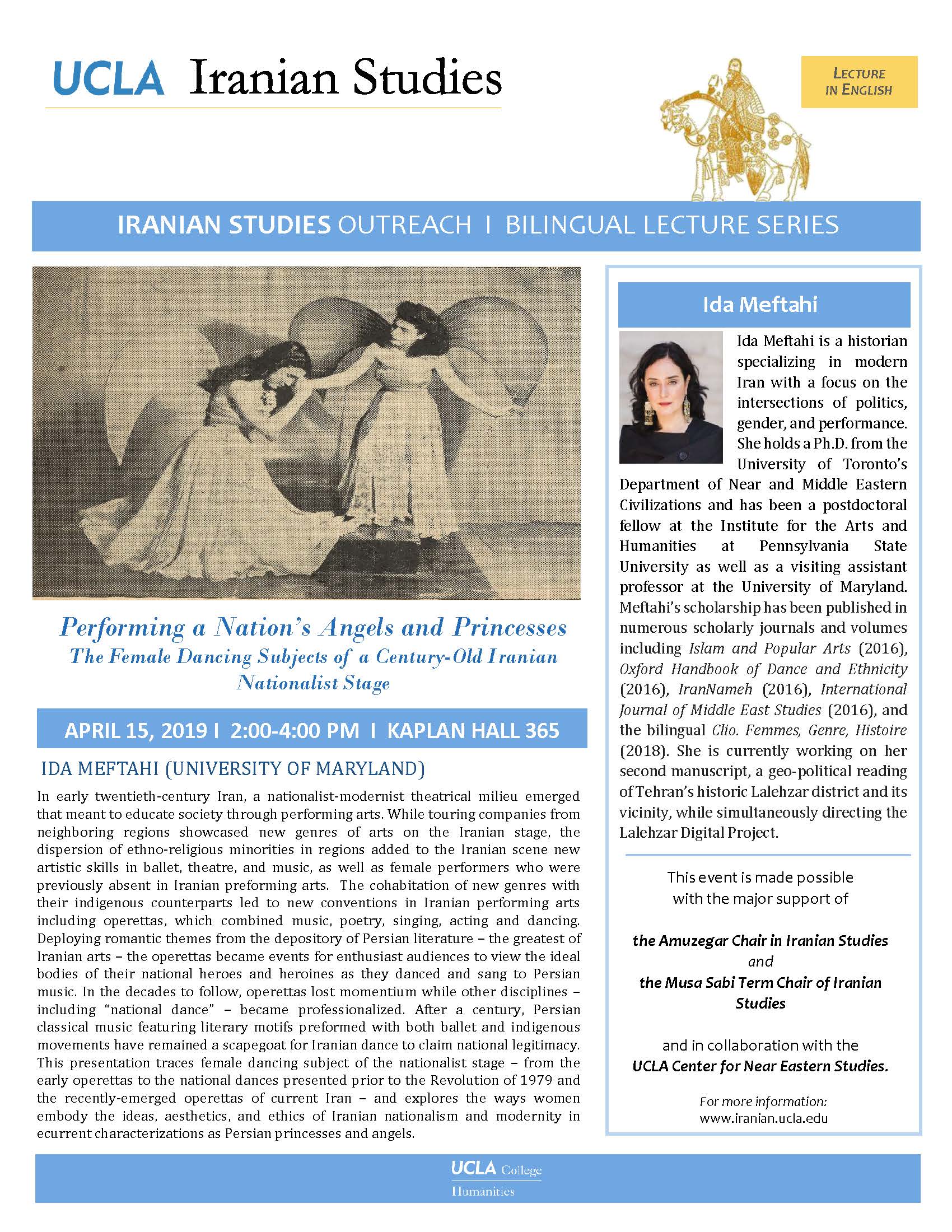 Performing a Nation’s Angels and Princesses:

The Female Dancing Subjects of a Century-Old Iranian Nationalist Stage

In early twentieth-century Iran, a nationalist-modernist theatrical milieu emerged that meant to educate society through performing arts. While touring companies from neighboring regions showcased new genres of arts on the Iranian stage, the dispersion of ethno-religious minorities in regions added to the Iranian scene new artistic skills in ballet, theatre, and music, as well as female performers who were previously absent in Iranian preforming arts.  The cohabitation of new genres with their indigenous counterparts led to new conventions in Iranian performing arts including operettas, which combined music, poetry, singing, acting and dancing. Deploying romantic themes from the depository of Persian literature – the greatest of Iranian arts – the operettas became events for enthusiast audiences to view the ideal bodies of their national heroes and heroines as they danced and sang to Persian music. In the decades to follow, operettas lost momentium while other disciplines – including “national dance” – became professionalized. After a century, Persian classical music featuring literary motifs preformed with both ballet and indigenous movements have remained a scapegoat for Iranian dance to claim national legitimacy. This presentation traces female dancing subject of the nationalist stage – from the early operettas to the national dances presented prior to the Revolution of 1979 and the recently-emerged operettas of current Iran – and explores the ways women embody the ideas, aesthetics, and ethics of Iranian nationalism and modernity in ecurrent characterizations as Persian princesses and angels.

Ida Meftahi is a historian specializing in modern Iran with a focus on the intersections of politics, gender, and performance.  She holds a Ph.D. from the University of Toronto’s Department of Near and Middle Eastern Civilizations and has been a postdoctoral fellow at the Institute for the Arts and Humanities at Pennsylvania State University as well as a visiting assistant professor at the University of Maryland.  Meftahi’s scholarship has been published in numerous scholarly journals and volumes including Islam and Popular Arts (2016), Oxford Handbook of Dance and Ethnicity (2016), IranNameh (2016), International Journal of Middle East Studies (2016), and the bilingual Clio. Femmes, Genre, Histoire (2018). She is currently working on her second manuscript, a geo-political reading of Tehran’s historic Lalehzar district and its vicinity, while simultaneously directing the Lalehzar Digital Project.