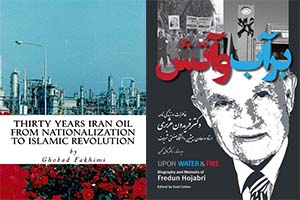 Ghobad Fakhimi received his BS as a petroleum engineer in 1956. He later attended the Abadan Institute of Technology and Columbia University, where he studied advanced chemical engineering. He then worked for NIOC, first as a plant operator, retiring as a member of the Board of Directors. Upon retirement, Fakhimi founded Independent International Consultants (IIC) through which he provided counsel and analysis for different international oil and engineering companies. His book Thirty Years Iran Oil not only chronicles the life of Ghobad Fakhimi but sheds light on one of the most important periods of both Middle Eastern and world history (1969-1979).

Fredun Hojabri received his Ph.D. in Synthetic Fuels from Karlsruhe University in Germany in 1964. He then joined the newly established Aryamehr University of Technology as a professor of chemistry, where he also served as academic vice-president from 1974 to 1976. Following the Cultural Revolution in Iran, Hojabri moved to San Diego where he lectured at UCSD then worked as chief scientist at the Enpex Corporation. He was the founder of Sharif University of Technology Association (SUTA), and helped organize Shiraz University and FANNI (Tehran University) associates.

His talk today is titled: “Personal Memoirs Intersecting Nationalization of the Iranian Oil Industry, Student Movements, and the Formations of Aryamehr (Sharif) University of Technology”

Co-sponsored by the UCLA Center on Near Eastern Studies