Thriving by Symbiosis: Manuscript Culture and the Eighteenth-Century Book Trade

Fourteenth Kenneth Karmiole Lecture on the History of the Book Trade

—lecture given by Betty A. Schellenberg (Simon Fraser University) 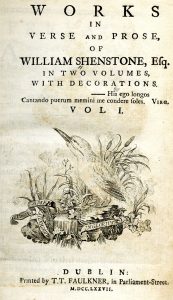 This lecture will present several case studies of successful interdependence between the energetic and innovative London book trade of the eighteenth century and the socially networked production of writing in manuscript. Contrary to a longstanding notion that the expansion of print rendered manuscript texts preliminary at best and obsolete at worst, leading members of the trade such as Robert Dodsley and Thomas Birch owed their success in part to their ability to navigate in both worlds. At the other end of the production spectrum, scribally oriented readers nurtured their own sociable lives by customizing materials such as George Lyttleton’s “The Squirrels of Hagley Park,” collected from the exploding magazine culture around them. The result was a rich and symbiotic intermedial environment in which it was possible for both old and new forms not only to survive, but to thrive.

Betty A. Schellenberg is a Professor of English at Simon Fraser University and a founding member of her department’s Print Culture group. Her interests in authorship, print and scribal cultures, literary sociability, and the Bluestocking movement inform her most recent monograph, Literary Coteries and the Making of Modern Print Culture (2016). Other publications include Samuel Richardson in Context, co-edited with Peter Sabor (2017), an edition of Samuel Richardson’s Correspondence Primarily on Sir Charles Grandison (1750–54) (2015), and The Professionalization of Women Writers in Eighteenth-Century Britain (2005). She is currently embarking on a study of eighteenth-century manuscript poetry miscellanies.