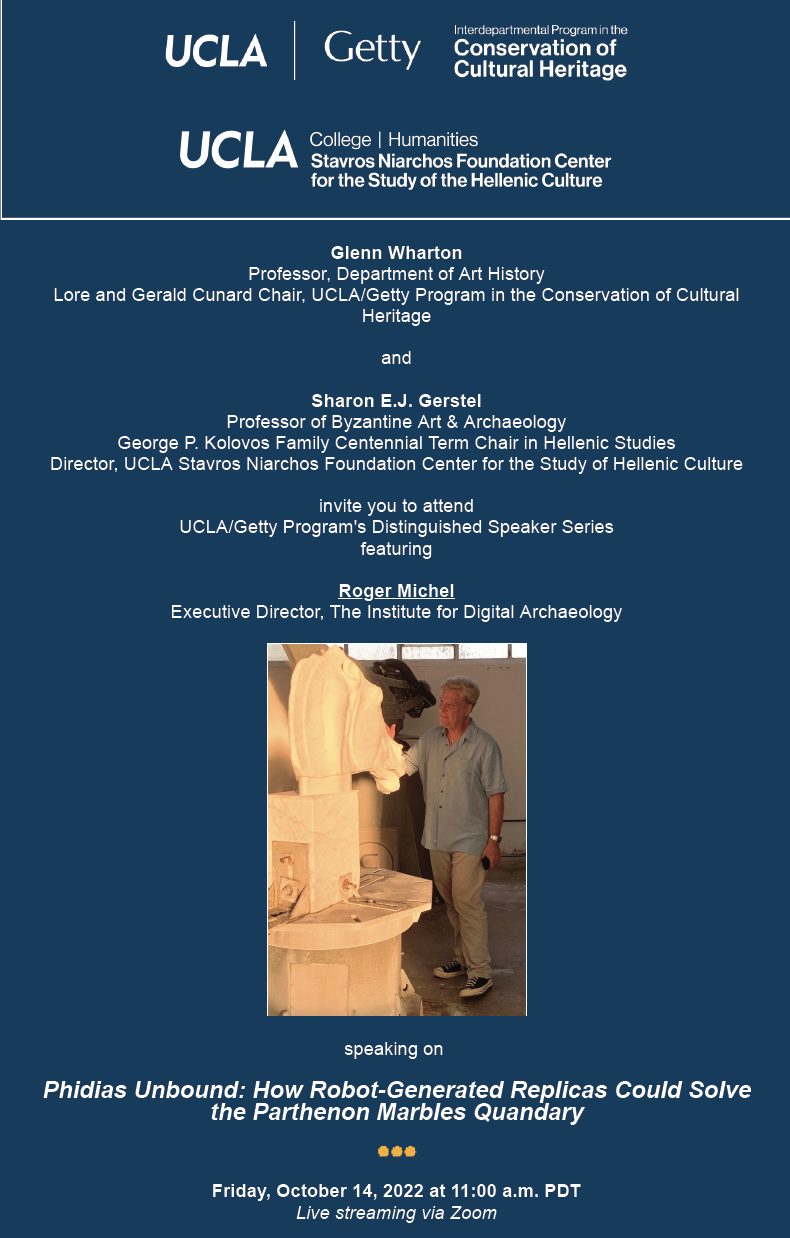 The Parthenon Marbles, commonly known as the Elgin Marbles, were removed from the ancient Acropolis of Athens in 1801 by Lord Elgin, British ambassador to the Ottoman Empire. Carved by the sculptor Phidias, they were eventually sold to the British government in 1817 and are housed in the British Museum. Public debate about repatriating the marbles is heated and ongoing.

Can the creation of exact copies of the originals resolve the repatriation quandary? Roger Michel, executive director of the Institute of Digital Archaeology, at the University of Oxford, believes the repatriation issue can be resolved with the help of 3-D machining. His research team has developed a robot with the ability to create faithful copies of large historical objects. Michel will explore humanity’s connection to culturally significant objects and the emphasis we place on physical possession. Is possession an inherently colonial concept? Are heritage assets particularly susceptible to being exploited for the purposes of historical revisionism? Under what circumstances can copies provide satisfactory substitutes for original material? These questions will be examined against the backdrop of the IDA’s ongoing Elgin repatriation efforts.

Roger Michel is the founder and Executive Director of the Institute for Digital Archaeology (IDA). The IDA operates globally, undertaking a huge variety of heritage projects, many of which are aimed at advancing social justice goals. Its principal partners are the UN, UNESCO, and local and national governments. Mr. Michel has published and lectured frequently on various heritage conservation topics. He was a member of the faculty at BU Law School for 25 years, is an Honorary Fellow of Trinity College (Oxford), and is co-publisher of Arion Magazine. Mr. Michel is a graduate of Harvard and Oxford Universities.

This event, co-presented by the UCLA/Getty Program in the Conservation of Cultural Heritage, is being held under the auspices of the Consulate General of Greece in Los Angeles and with the generous support of the Stavros Niarchos Foundation.

UCLA/Getty Program in the Conservation of Cultural Heritage
Website:
https://hellenic.ucla.edu/organizer/ucla-getty-program-in-the-conservation-of-cultural-heritage/