Reading for Echoes: Machiavelli, Guicciardini, and Exemplarity in the Brief Discourse of c. 1587 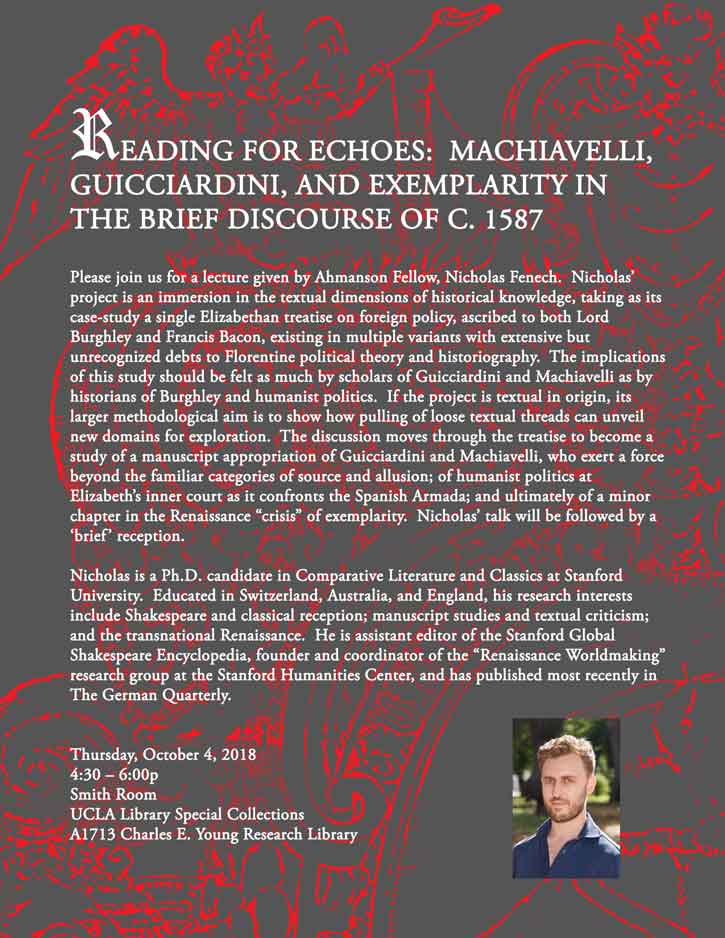 Nicholas Fenech’s project is an immersion in the textual dimensions of historical knowledge, taking as its case-study a single Elizabethan treatise on foreign policy, ascribed to both Lord Burghley and Francis Bacon, existing in multiple variants with extensive but unrecognized debts to Florentine political theory and historiography. The implications of this study should be felt as much by scholars of Guicciardini and Machiavelli as by historians of Burghley and humanist politics. If the project is textual in origin, its larger methodological aim is to show how pulling on loose textual threads can unveil new domains for exploration. The discussion moves through the treatise to become a study of a manuscript appropriation of Guicciardini and Machiavelli, who exert a force beyond the familiar categories of source and allusion; of humanist politics at Elizabeth’s inner court as it confronts the Spanish Armada; and ultimately of a minor chapter in the Renaissance “crisis” of exemplarity. The talk will be followed by a ‘brief’ reception.

Nicholas is a PhD candidate in Comparative Literature and Classics at Stanford. Educated in Switzerland, Australia, and England, his research interests include Shakespeare and classical reception; manuscript studies and textual criticism; and the transnational Renaissance. He is assistant editor of the Stanford Global Shakespeare Encyclopedia, founder and coordinator of the “Renaissance Worldmaking” research group at the Stanford Humanities Center, and has published most recently in The German Quarterly.