Please join the Pourdavoud Center for the Study of the Iranian World for a lecture by Dr. Robert Steele.

Ancient Persia in Pahlavi Politics: The Imperial Celebrations of 1971 and Cultural Policy under the Shah

In October 1971, heads of state, political and cultural figures, business leaders, and journalists from around the world came to Persepolis at the invitation of Shah Mohammad Reza Pahlavi of Iran. They were there to celebrate the 2500th Anniversary of the Founding of the Persian Empire by Cyrus the Great. Many historians and commentators consider this event to have been a huge mistake – some even claim it sparked the widespread popular discontent with the Shah’s rule that culminated in the revolution of 1978/9. For decades, coverage of the Celebrations has been characterized by sensationalism and an obsession with the supposed flamboyance of an oriental despot, and a 2016 BBC documentary on the event titled Decadence and Downfall: The Shah’s Ultimate Party shows that not much has changed. This paper challenges the prevailing narrative of Celebrations, looking beyond the extravagant parties to analyze them in the context of cultural policy in the late Pahlavi period. It examines what the regime sought to gain from holding such an event, economically and politically as well as ideologically, and the role played by the cultural structures of the Pahlavi state.

Robert Steele is the inaugural recipient of the Jahangir and Eleanor Amuzegar Post-Doctoral Fellowship in Iranian Studies at the Department of Near Eastern Languages and Cultures at UCLA. He earned his PhD from the University of Exeter’s Institute of Arab and Islamic Studies, specializing in 20th century Iranian history. His first book, titled The Shah’s Imperial Celebrations of 1971: Nationalism, Culture and Politics in Late Pahlavi Iran, will be published in 2020, and will be the first comprehensive study on the subject. 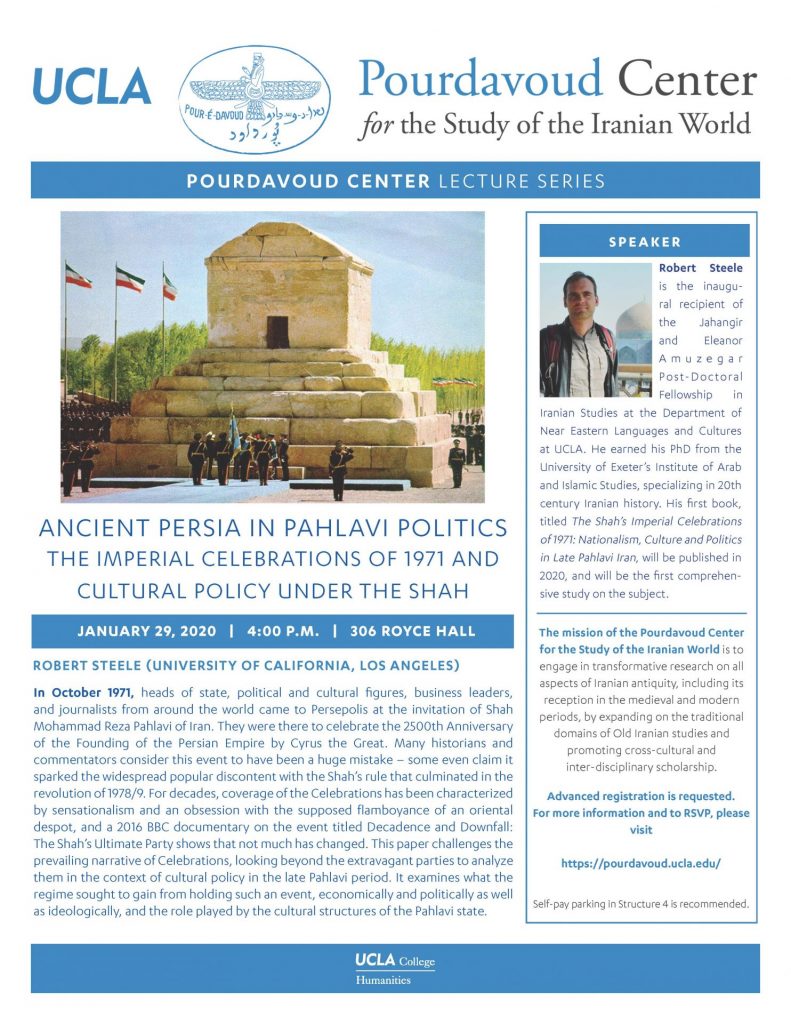