Skip to main content
Home » Events » Classics » On Outgroups and Muted Groups: A Conference in Honor of Amy Richlin

On Outgroups and Muted Groups: A Conference in Honor of Amy Richlin 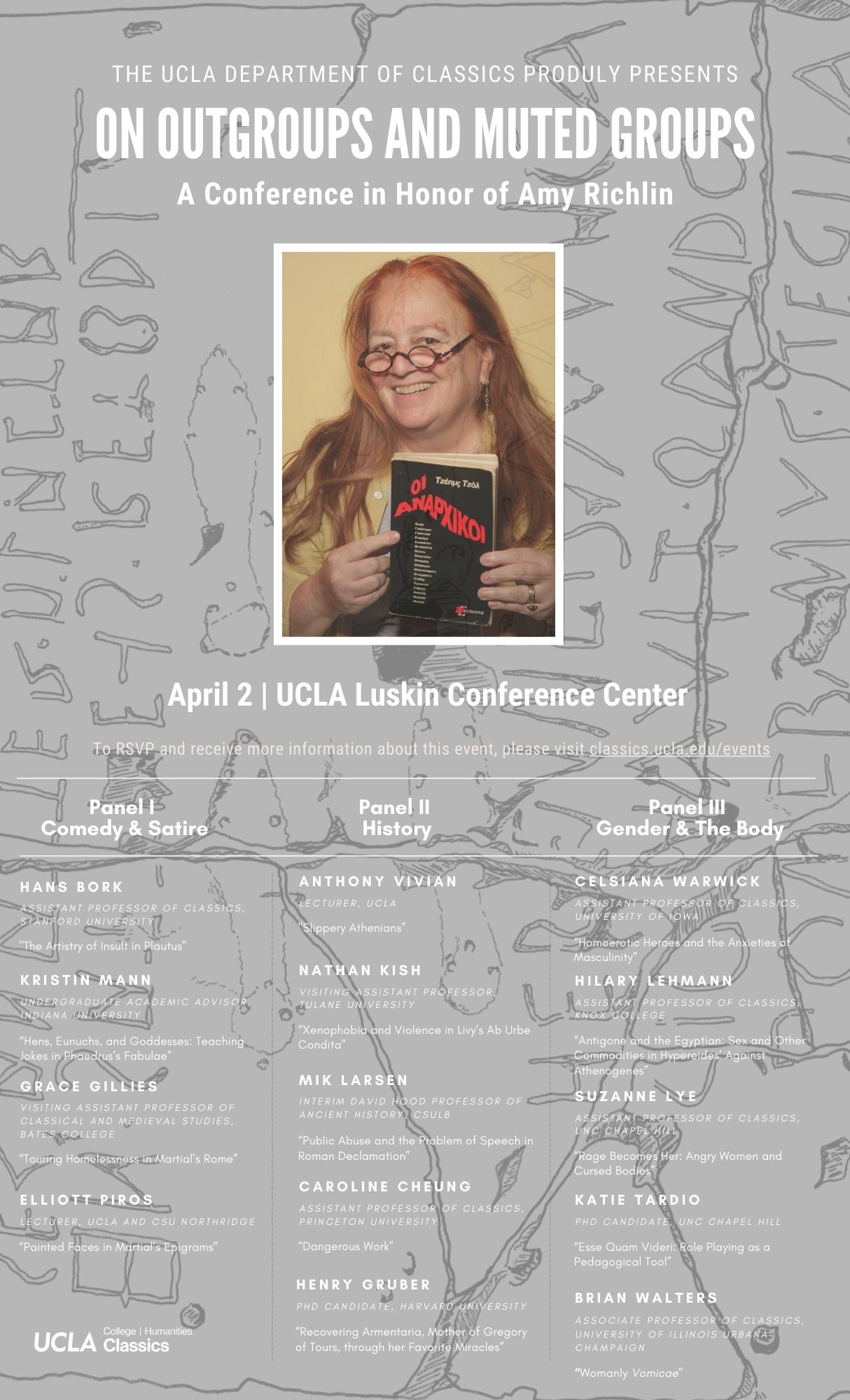 Professor Amy Richlin will be retiring at the end of the coming academic year. We look forward to celebrating her path-breaking career and reuniting with her many UCLA students at this conference in her honor. The conference will take place on April 2nd in the Legacy Room at the UCLA Meyer and Renee Luskin Conference Center. There will also be a reception in Dodd on Friday night and a party off campus on Saturday. If you are planning to attend the conference, please register using the form below.

Please note that this conference will take place in person (not on zoom).

To see a schedule of papers please scroll down.

Hilary Lehmann (PhD 2016), Knox College, “Antigone and the Egyptians: Sex and Other Commodities in Hypereides’ Against Athenogenes”

As I look towards retirement in June 2022 after 45 years of teaching, I am honored by the department’s decision to hold a conference for me. Its theme, “On Outgroups and Muted Groups,” comes from the self-description on my UCLA webpage, and well describes the work that has occupied me for all these years of writing history from below. I began from the study of Roman satire which led me, to my surprise, into the then brand-new field of the history of sexuality and made me into an outspoken feminist. I was lucky enough to begin this work in the heyday of Second Wave feminism, and, thanks to the supportive network of the Women’s Classical Caucus and the quadrennial “Feminism and Classics” conferences, I had a lot of people to talk to. After jobs at Rutgers, Dartmouth, and Lehigh, I moved to USC in 1989, teaching jointly in Classics and Gender Studies, which meant that my Classics students read a lot of feminist theory and my Gender Studies students learned a lot about antiquity. At UCLA, from 2005 onwards, I have taught graduate seminars in “Roman History and the Theory of History,” satire, comedy, epistolography, ancient sexuality, and Roman women’s history, with undergraduate courses to match, while serving from 2011 onwards as director of the post-bacc program. All of this goes to explain why I wanted my dear students to be the speakers at this final conference, for in teaching them I have learned a great deal. They will be returning from where their far-flung jobs have taken them, to speak here on history, comedy, satire, and gender, and tell me something new, as they always do.