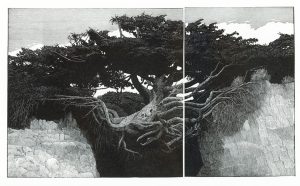 Given by Richard Wagener, Mixolydian Editions

This lecture will be live streamed on the Center’s YouTube Channel and available to watch  following the event. Richard Wagener will discuss his forty-plus year dialogue with wood engraving, beginning with the origin and evolution of abstraction and representation in his work, along with early and late influences. The talk will cover how the making of Zebra Noise with a Flatted Seventh was an entry into the world of fine press books, and essential point in the furtherance of this dialogue that eventually led to the publication of Loom 2014, Teapots & Tympani 2019, and finally Cascadia in 2021.

Richard Wagener has an undergraduate degree from the University of San Diego and a graduate degree from Art Center College of Design. He has been engraving wood for forty years and his work has been in many fine press editions, most notably with Peter Koch in Berkeley and the Book Club of California. In 2006 Richard established the imprint Mixolydian Editions to publish his own fine press editions of his work. He has collaborated with David Pascoe of Nawakum Press on three fine press books, one of which earned them the 2016 Carl Hertzog Award for Excellence in Book Design. Mr. Wagener was also awarded the Oscar Lewis Award for contributions to the book arts. He currently lives and works in northern California.

The Stephen A. Kanter Lecture on California Fine Printing is dedicated to an exploration of the history and practice of the printing arts, especially as practiced in California. The annual Kanter lectures, established through the generous support of the late Stephen A. Kanter, M.D., began in 1998 and have featured various printers and scholars.

This lecture is free but you must be registered to attend. Seating is limited and seats are available on a first-come-first-served basis.
+ Google Calendar+ Add to iCalendar