A Medieval Mansio Refuge on the Carolingian Alpine Road in Bramans, France 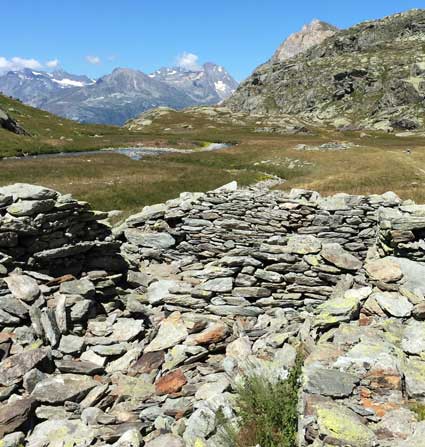 The old Carolingian and medieval route through the Savoie French Alps connected Grenoble to Turin. The route followed what had been the Roman Road and before that a Celtic pathway that is often suggested as Hannibal’s route into Italy. Along the ancient pathway over the Col du Clapier-Savine Coche Pass, a ruined stone refuge guards the way at an altitude of 2200 meters (7000 ft.), above which weather could become a limiting factor any day of the year.

While the structure may well date back to the late Roman period, several different methods have confirmed the refuge’s most occupied periods to be from the seventh and eighth centuries on and off through the late medieval period and into the 18th century. In this Roundtable talk, Patrick Hunt (Stanford University) explores the occupation history of the refuge using artifactual evidence and pioneering dating techniques including lichenometry.

Funding for the CMRS Roundtable series is provided by the Armand Hammer Endowment for the UCLA Center for Medieval and Renaissance Studies.