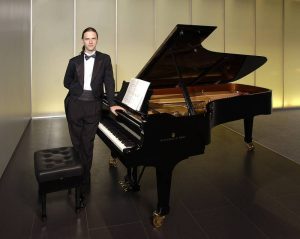 Markus Groh gained immediate world attention after winning first prize at the Queen Elisabeth Competition in Brussels in 1995, the first German to do so. Since then, his unique sound and astonishing technique have confirmed his place among the finest pianists in the world. Sharing the same birthday with Alfred Brendel, Arturo Benedetti Michelangeli, and Maurizio Pollini, he has proven himself worthy of their company.

Further details and full program on our website.
Chamber Music at the Clark tickets are no longer distributed via lottery.
Tickets for the Markus Groh concert will go on sale
at 12 noon on Tuesday, October 18, 2022.
Tickets sales are limited to 2 per person.
Tickets are sold on a first-come, first-served basis.