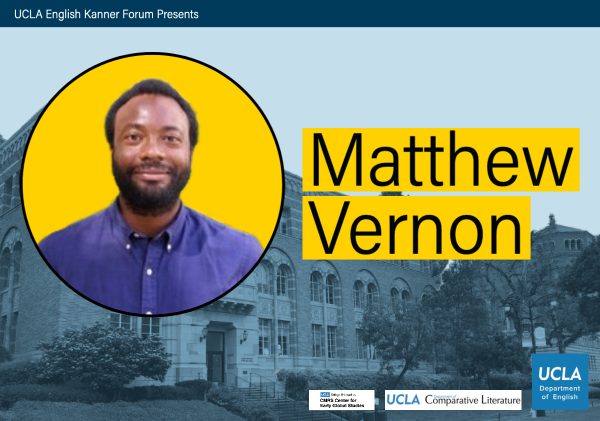 Join UCLA English for “Unexceptional Blackness and Blind Matter,” a talk featuring Matthew Vernon, associate professor of English Literature at the University of California, Davis. Professor Vernon will discuss Branden Jacobs-Jenkins’s adaptation of Everyman as it relates to invisibilization of race. Professor Vernon will focus on the problems and possibilities this play raises in relation to politics and race through the Middle Ages.

The talk will be followed by a Q & A moderated by UCLA English Professor Matthew Fisher. This event is co-sponsored by UCLA’s Department of African American Studies, Department of Comparative Literature and CMRS Center for Early Global Studies.

Register here for onsite attendance in Kaplan Hall 193 or online attendance on Zoom. After registering, you will receive a confirmation email containing information about joining the event.

Matthew Vernon is an Associate Professor of English Literature at the University of California, Davis. His first book, The Black Middle Ages, explores the understudied relationship between medievalism and Blackness in nineteenth and twentieth-century literature. He has also written articles on a set of his interests around issues of race and genre. This has led to articles on the post-truth phenomenon in nineteenth-century novels, Black speculative fiction, and comic books about displacement and vulnerability. He is currently working on an article on the adaptation of the medieval play, Everyman.

Matthew Fisher is an Associate Professor in the Department of English at UCLA. His first book, Scribal Authorship and the Writing of History in Medieval England (2012), examines the entangled work of medieval scribes and the writers of history. He is currently writing a book about library fires and the afterlife of medieval manuscripts from the Dissolution to the 18th Century. In addition to his published academic essays and articles, he has also written for Public Books and Zocalo Public Square. He is the editor of the journal Viator.