Jews and the American West: Violence, Race, and Masculinity 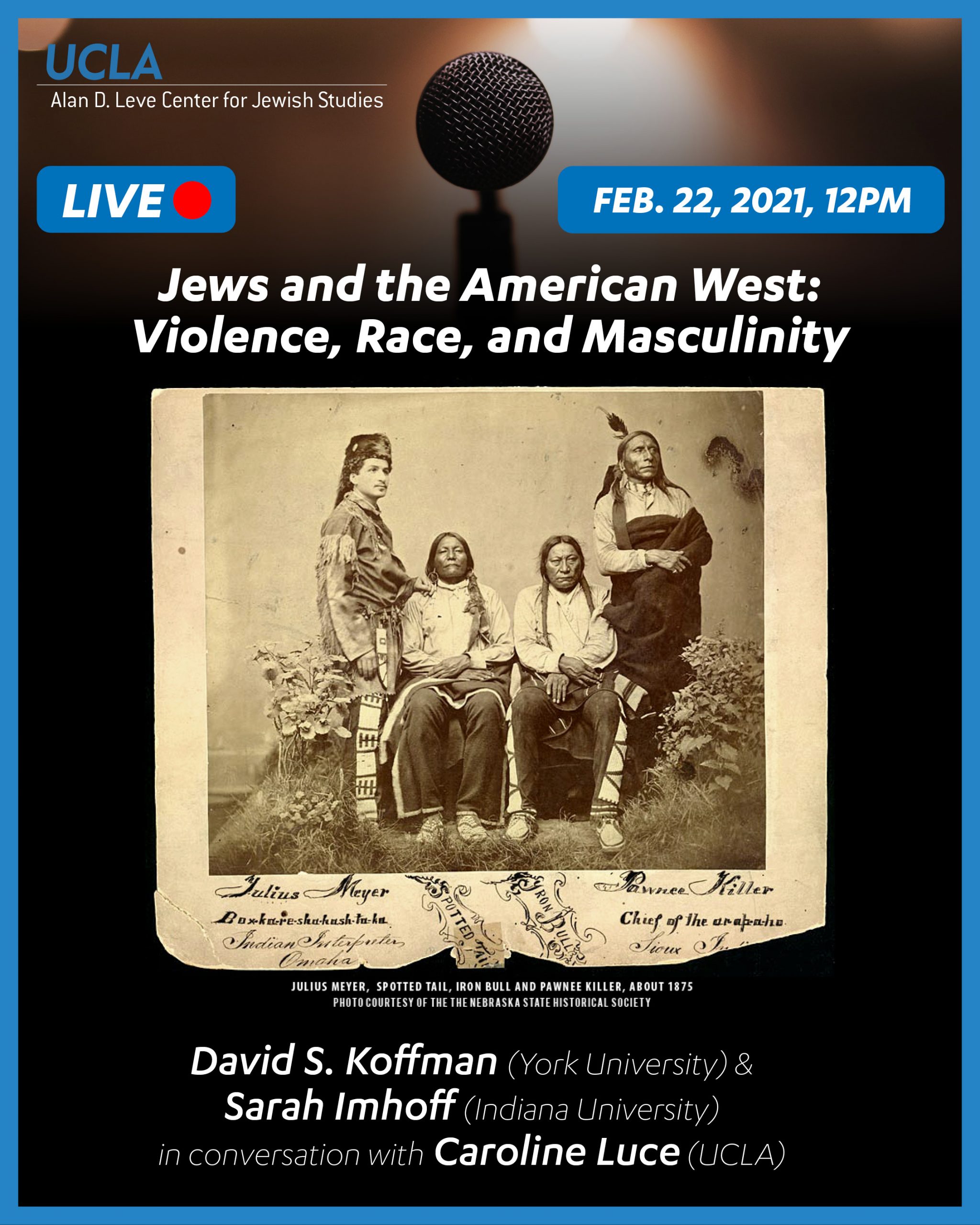 This webinar brings together David S. Koffman (York University), author of The Jews Indian, and Sarah Imhoff (Indiana University), author of Masculinity and the Making of American Judaism, in dynamic conversation with host Caroline Luce (UCLA) about Jews’ relationship to the physical and discursive landscapes of the American west. How did the American colonial project shape Jewish ideas about masculinity, morality, and violence? How has the figure of the Jewish frontiersman been used to advance ideologies of belonging, both in the U.S. and around the world? Using historical materials drawn from their research, together they consider western Jewish subjectivity and the place of “the frontier” in American Jewish history.

Sarah Imhoff is Associate Professor in the Department of Religious Studies and the Borns Jewish Studies Program at Indiana University. She writes about religion and the body with a particular interest in gender, sexuality, and American Judaism. She has published widely in these areas, including  the role of DNA and genetic discourse in constructions of Jewishness, race and Jewishness in American contexts, and the history of the field of Religious Studies, especially in its relation to US law. Her first book, Masculinity and the Making of American Judaism (Indiana University Press, 2017), explored the ways that the categories of gender and “good” religion shaped each other in the early twentieth-century United States. Her forthcoming book, The Lives of Jessie Sampter: Queer, Disabled, Zionist (Duke University Press) considers the question of what it means when our embodied lives do not match our religious and political ideals. She and Susannah Heschel are currently at work on another book project about women and Jewish Studies (Princeton University Press). She serves as co-editor and co-founder of the journal American Religion.

David S. Koffman (PhD, NYU, 2011) is a cultural and social historian of Canadian and US Jewries. He holds the J. Richard Shiff Chair for the Study of Canadian Jewry, and is an associate professor in the Department of History at York University, where he teaches courses on Canadian Jewish history, religion in American life, the meanings of money, genealogy as history, and modern antisemitism. He earned Masters degrees in Anthropology (University of Toronto), Public Administration (Wagner School of Public Service, NYU) and Hebrew & Judaic Studies (NYU), and held a SSHRC Post-Doctoral Fellowship in the Department of History at the University of Toronto. His first monograph, The Jews’ Indian: Colonialism, Pluralism, and Belonging in America (Rutgers University Press, 2019), winner of a 2020 Association for Jewish Studies’ Jordan Schnitzer Book Award, explores the American Jewish encounter with Native America in the nineteenth and twentieth centuries. His published work has appeared in several volumes of collected essays, and in journals including The Journal of American Ethnic History, The Journal of Jewish Education, Contemporary Jewry, American Jewish History, and The Journal of The Gilded Age and Progressive Era. His newest book project, an edited volume entitled, No Better Home? Jews, Canada, and the Sense of Belonging, will be published by the University of Toronto Press in early 2021. He serves as the associate director of York University’s Israel & Golda Koschitzky Centre for Jewish Studies, and is the Editor-in-Chief of the journal Canadian Jewish Studies / Études juives canadiennes.