Skip to main content
Home » Events » CMRS Center for Early Global Studies » The Future Is Now: Art & Technology in the Renaissance & Beyond

The Future Is Now: Art & Technology in the Renaissance & Beyond 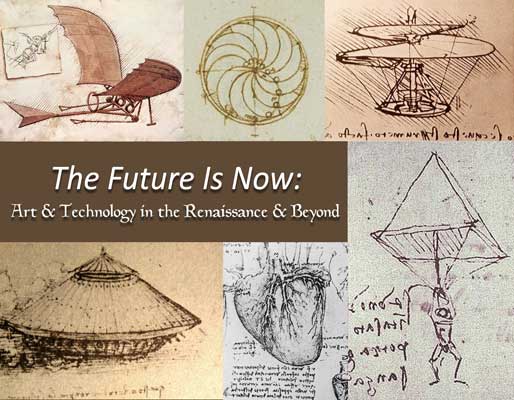 The Renaissance was a period defined by visions of the future. Renaissance humanists including Petrarch, Dante, Leonardo Bruni, and Vasari expressed a concern for the future, fame, and posterity. At the same time, European explorers, merchants, soldiers, and missionaries traversed the globe fueled by visions of the future as well as imperial ambition. Renaissance discoveries, inventions, and developments generated a sense of excitement and wonder but also concern for the future among Europeans. At times, enthusiasm and optimism transformed into anxiety about these new worlds, finds, and fantastic devices.

This symposium takes as its inspiration the works of: Renaissance genius Leonardo da Vinci (1452-1519), prolific artist and inventor; the Spaniard Gonzalo Fernández de Oviedo (1478-1557) whose explorations in the Americas led to discoveries of new plants which forever changed art and medicine; Italian clockmaker and engineer Juanelo Turriano (c. 1500-1585) who altered scientific understanding of kinesiology and motion with his new clocks, winding springs, and lifelike automata; and Andreas Vesalius who along with French printmaker Charles Estienne produced landmark editions on human anatomy that revolutionized western medicine.

This conference, organized by Charlene Villaseñor Black (UCLA) and Mari-Tere Álvarez (The J. Paul Getty Museum), examines the intersections between the new science, artistic rebirth, and European imperialism in the overlapping worlds of science and art and how Renaissance artists, thinkers, and scientists explored, invented, and theorized about this “brave new world.”

Support for this symposium is provided by the Endowment for the UCLA Center for Medieval & Renaissance Studies.