The Flow of Ideas: Leonardo and Water 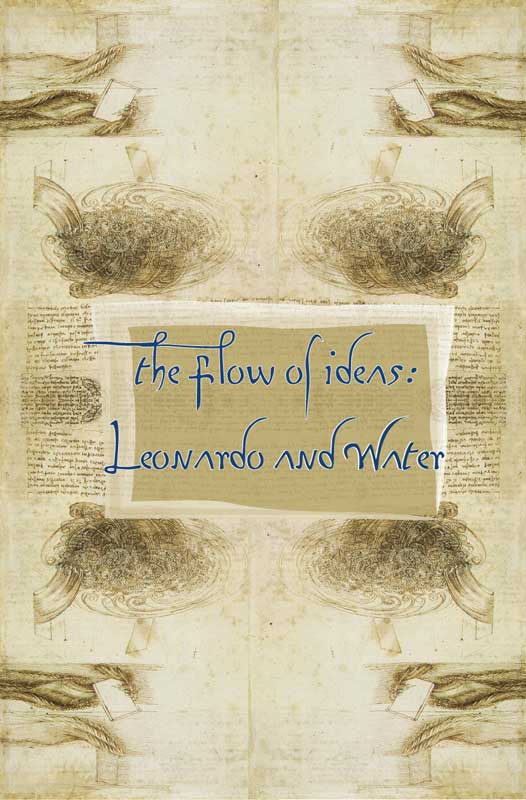 The topic of water appears in an obsessive way in Leonardo’s activity as both artist and scientist. Water is the foundation of life in the world of Nature. Through movement it expresses its eternal and dynamic vital force, leading to the comprehension of the mysteries and the laws that animate the universe. Leonardo wrote: “What is water? Water is, among the four elements the second less heavy, and the one of second fickleness. It never has rest until it joins up to the marine elements, where, not being annoyed by the winds, it settles down and rests with its surface equidistant from the center of the world” (Ms. C, folio 26 v). Water, then, becomes in his mind a theme of subtle and constant naturalistic and scientific investigation, overflowing as a dynamic and metamorphic element of reality.

In his works we see a continuous interrelation between art, science, anatomy and technique: his studies on the motion of water and on the dynamics of vortices, the capacity and the speed of currents in channels and in rivers, the distribution of water from the mouths of channels, the percussion of water on the banks of rivers, its employment in operations of military strategy, its erosive force, the correlation of the veins of the earth and those of the body. Water can also be a fascinating element for architecture, as his fountains and marvelous hydraulic devices prove.

UCLA Library Special Collections is exhibiting ‘Master of Water:’ The Flow of Water through Leonardo’s Notebooks. This exhibit displays images of water in the Leonardo manuscript facsimiles from the Elmer Belt Library of Vinciana, as well as some of the early book titles that Leonardo had in his library that could have influenced his studies and his inventions related to water. Visit UCLA Special Collections on the basement level of Young Research Library, Room A1713, 10 am – 5 pm, Monday – Saturday. Our appreciation and thanks to Jane Carpenter, Octavio Olvera, and Neil Hodge for creating this exhibit in conjunction with this conference.

Self-pay parking in lots 2, 3, 4, and 5. More parking information at https://main.transportation.ucla.edu/campus-parking/visitors

Funding for this program is provided by the Ahmanson Foundation and the Franklin D. Murphy Chair in Italian Renaissance Studies. CMRS relies on the generosity of donors for support of its programs. Please contribute at cmrs.ucla.edu/giving.