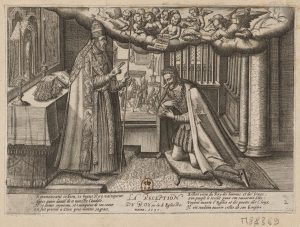 Between 1598 and 1618, a series of interlocking treaties and truces brought peace to Europe. The Civil Wars in France, the Anglo-Spanish war, the Dutch rebellion, even the so-called “Long War” between the Habsburgs and the Ottomans, were temporarily, if not definitively settled. In the absence of open confessional warfare, many countries found themselves obliged to re-think the relationship between church, confession, and political authority, and the privileges afforded to religious minorities. Confessional conflict turned inward, leading both Roman Catholicism and Reformed Protestantism into increasingly bitter and violent internal confrontations.

In a world of confessional uncertainty, true loyalties were more important than ever. The Europeans of the Short Peace accordingly became preoccupied with honesty and sincerity, and conversely with the problem of deception and dissimulation. Conversion was the problem that united these concerns. After all, the European order itself had been shaped by King Henri IV of France’s 1594 reconciliation with Rome. During the Short Peace, Protestant and Catholic figures with public profiles were rumored to be ‘secret converts,’ part of a hidden force of unbelievers working from the inside to hollow out their ostensible religions. Apparently genuine converts were heavily scrutinized; other figures only retained their importance by insisting that they had not converted. This conference explores how individuals navigated the era’s increasingly labyrinthine confessional landscape.

Once available, papers will be pre-distributed to registrants.

Panel 1
Chair: (to be confirmed)

Eloise Davies, Peterhouse College, University of Cambridge
“Reformed but Not Converted: Paolo Sarpi and the English Mission in Venice, 1607–1610”

Michael Questier, University of Durham
“The Reputation of James VI and I Revisited”

Anthony Milton, University of Sheffield
“Britain and Religious Exiles and Travelers in the Short Peace”

Sarah Mortimer, Christ Church College, University of Oxford
“Political Science in Confessional Context–Or, How to Use Daneau in Danzig”

Image: The Reception of Henri IV into the Catholic Church in 1595, from the Bibliothèque nationale de France