Claiming Nobility in the Monarquía Hispánica: A Comparison of Morisco and Indigenous Strategies 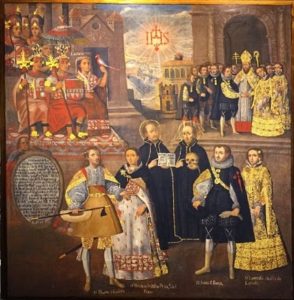 By the early seventeenth century, petitioners at the royal court in Madrid who claimed descent from the Nasrid emirs of Granada, the Mexica rulers, or the Inca rulers, found ways to acquire noble status and secure rights to their ancestral lands in the form of entailed estates. They invoked discourses that emphasized their direct descent from monarchs (reyes, señores naturales) and they deployed the concepts of vassalage and blood purity to stake their claims.

Dr. Cook’s paper will examine the intersected histories of the descendants of the Nasrid nobility in Granada who successfully maintained their status despite increasing anxieties about Morisco presence on the Peninsula, and the descendants of the Inca and Mexica señores naturales who litigated for recognition of their family’s rights and status. These various families articulated diverging ideas about sovereignty, nobility, limpieza de sangre (blood purity), and inheritance, as each of these concepts related to the broader idea of belonging to a composite monarchy that recognized the rights of individual kingdoms through the language of vassalage. She will suggest how the confluence of diverse claims to status based on genealogical arguments and discourses about nobility may have also contributed to the construction of early ideas about ‘race.’

Karoline Cook currently holds the position of Lecturer in the History of the Atlantic World at Royal Holloway, University of London. Both her research and teaching interests explore the interconnections between Atlantic and Mediterranean worlds. Her research focuses on Moriscos and the Spanish Empire, and the intersection between religious identity, race, and nation in the creation and negotiation of ethnic categories. Her book, Forbidden Passages: Muslims and Moriscos in Colonial Spanish America was published by the University of Pennsylvania Press in 2016. Related publications include “Navigating Identities: The Case of a Morisco Slave in Seventeenth-Century New Spain” in The Americas 65:1; “‘Moro de linaje y nación’: Religious Identity, Race, and Status in New Granada,” in Race and Blood in the Iberian World, eds. Max Hering Torres, María Elena Martínez, and David Nirenberg (Berlin: LIT VERLAG, 2012); and “Muslims and the Chichimeca in New Spain: the Debates over Just War and Slavery” in Anuario de Estudios Americanos, 70:1.