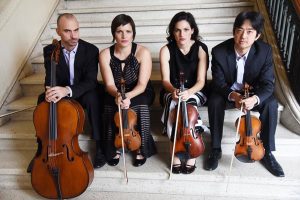 Join us for an exclusive online event featuring a concert performed by the Jupiter String Quartet just for our audience, followed by a live Q & A with the musicians moderated by Bruce Whiteman, Clark Librarian Emeritus. Audience members will have the opportunity to pose questions via Zoom Q&A.

To learn more about Chamber Music Conversations from the Clark and view videos from the series, visit: http://www.1718.ucla.edu/events/categories/music/

The Jupiter String Quartet is a particularly intimate group, consisting of violinists Nelson Lee and Meg Freivogel, violist Liz Freivogel (Meg’s older sister), and cellist Daniel McDonough (Meg’s husband, Liz’s brother-in-law). Now enjoying their 19th year together, this tight-knit ensemble is firmly established as an important voice in the world of chamber music. The New Yorker claims, “The Jupiter String Quartet, an ensemble of eloquent intensity, has matured into one of the mainstays of the American chamber-music scene.”

The quartet has performed in some of the world’s finest halls, including New York City’s Carnegie Hall and Lincoln Center, London’s Wigmore Hall, Boston’s Jordan Hall, Mexico City’s Palacio de Bellas Artes, Washington, D.C.’s Kennedy Center and Library of Congress, Austria’s Esterhazy Palace, and Seoul’s Sejong Chamber Hall. Their major music festival appearances include the Aspen Music Festival and School, Bowdoin International Music Festival, Cape Cod Chamber Music Festival, Rockport Music Festival, Caramoor International Music Festival, Music at Menlo, the Banff Centre, the Seoul Spring Festival, and many others. In addition to their performing career, they have been artists-in-residence at the University of Illinois in Champaign-Urbana since 2012, where they maintain private studios and direct the chamber music program.

Their chamber music honors and awards include the grand prizes in the Banff International String Quartet Competition and the Fischoff National Chamber Music Competition; the Young Concert Artists International auditions in New York City; the Cleveland Quartet Award from Chamber Music America; an Avery Fisher Career Grant; and a grant from the Fromm Foundation. From 2007–2010, they were in residence at the Chamber Music Society of Lincoln Center’s Chamber Music Two.

The quartet’s latest album, Metamorphosis (Marquis Classics, 2020), features Beethoven’s String Quartet No. 14, and Ligeti’s Quartet No. 1 “Métamorphoses nocturnes.” Of the album, Cleveland Classical proclaimed “Perhaps what stands out most is the Jupiter Quartet’s precise, unified, and spirited sense of ensemble.” The quartet’s discography also includes numerous recordings on labels including Azica Records and Deutsche Grammophon.

This event is free of charge, but you must register to attend in advance. All audience members will receive instructions via email after registration: